iFixit has completed an exhaustive teardown of the HomePod and found that, while the speaker appears to have a simple design on the outside, it will likely be extremely difficult for customers to complete do-it-yourself repairs. 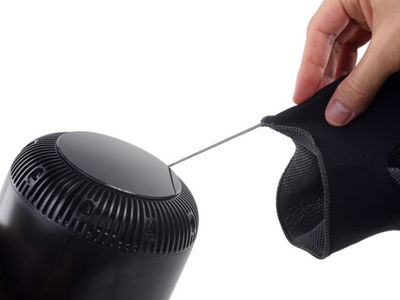 HomePod's mesh has a drawstring
The teardown experts, who admit there might be a better way to open the HomePod that they've yet to learn, were forced to use a variety of tools to gain access to the internal components, including a heat gun, a guitar pick, a knife, and after all else failed, even a hacksaw and an ultrasonic cutter.

Underneath the rubber foot, iFixit found a hidden 14-pin connector that they speculate is probably used to test or program HomePods on pogo pins during assembly in Taiwan. Given the port sits below a layer of strong adhesive, it's unclear if it will be used for any other purpose, such as diagnostic testing.

HomePod's hidden 14-pin port
Digging further, the team found the HomePod has an Apple A8 chip, as advertised, likely paired with 1GB of RAM layered underneath. There's also a 16GB flash storage chip from Toshiba, although users can't store songs on the speaker directly, as music must be streamed from Apple Music or an AirPlay source.

HomePod also has a two-part power supply, composed of an inner block handling the AC/DC conversion, and an outer ring distributing power to all eight of the speakers. The seven tweeters each have a conductive screw post.

In the end, the teardown concludes that the HomePod is very durable, but extremely difficult to open. This might explain why Apple is charging $279 to replace the HomePod entirely if it is damaged, unless only the power cable is damaged, in which case Apple charges a more reasonable $29 fee to have it repaired.

There's also AppleCare+ for HomePod, which adds up to two incidents of accidental damage coverage, each subject to a service fee of $39 in the United States, plus the upfront cost of the plan. But even then, it still appears that Apple is simply replacing damaged HomePods outright beyond power cable repairs.

Amps are all class D? Let's be real, this gadget has no power, no room for the kind of inductors needed to make great sounding audio from a digital amp.

I'm thinking a lot of people will opt for actually listening to the device to determine if they like the sound instead of reading a spec sheet to make the determination
Score: 31 Votes (Like | Disagree)

davie18
Really there should be no need to ever repair these because of damage caused by users.

The chance of you damaging them is reduced drastically by the fact it's a product that'll remain still 99% of the time for most people. How often do you manage to cause any damage at all to a TV, for example? SO I wouldn't really worry about the low repair-ability
Score: 21 Votes (Like | Disagree)

This tear down reminds me of skinning a Furby....

nwcs
I don’t see this as something people need to be self-repairing. It’s not like a phone or computer. Not every electronic device is intended, or desirable, to be accessible for user repair. I would imagine in most cases a typical user couldn’t even source a component with which to repair — nor have the expertise to identify the failed component.
Score: 10 Votes (Like | Disagree)

jimbobb24
Repairability of a speaker? This may be the shark jumping on repairability. I used to repair my car but new cars are wound so tight and the electric ones are so tight that you cannot repair most of them beyond the basics without serious investments in special tools. Welcome to the age of the micro.
Score: 8 Votes (Like | Disagree)
Read All Comments