Starting with iOS 11.2, the iPhone 8, iPhone 8 Plus, and iPhone X are able to charge at 7.5 watts using compatible Qi-based wireless charging accessories.

Currently, on iOS 11.1.1, the three devices charge at 5 watts using Qi wireless chargers, but Apple promised that faster speeds would become available in a future update. It appears that update is iOS 11.2. 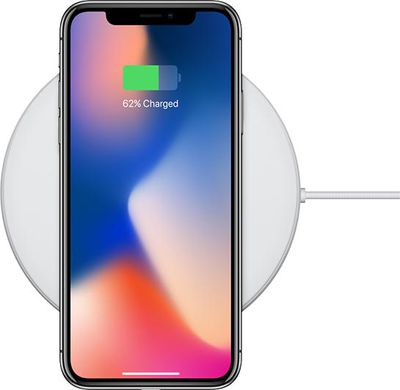 MacRumors received a tip about the new feature from accessory maker RAVpower this evening, and tested the new charging speeds to confirm. Using the Belkin charger that Apple sells, which does support 7.5W charging speeds, the iPhone X was charged from 46 to 66 percent over the course of thirty minutes.

The same iPhone charged from 46 percent to 60 percent over 30 minutes when using a wireless charging accessory that does not offer 7.5W charging speeds. Our testing was intended to emulate real world conditions, with a case on and Airplane Mode not activated.

With support for 7.5W charging speeds, the iPhone 8, 8 Plus, and iPhone X will be able to charge more quickly over a wireless connection, and it appears 7.5W wireless charging speeds are faster than the speeds you get with the standard wired 5W power adapter.

At 7.5 watts, Apple's wireless iPhones do not support the same wireless charging speeds that are available on some other Qi-based smartphones, as the current Qi 1.2 standard allows for up to 15W of wireless charging power. Still, 7.5 watts is better than 5 watts and should offer some noticeable improvements for iPhone 8, 8 Plus, and X owners.

Several other Qi-based wireless charging accessories from other third-party manufacturers also support the higher speeds, such as the RAVpower Fast Wireless Charger, but there are accessories out there that don't, so you'll want to look for 7.5W charging speeds as a listed feature when making a purchase.

iOS 11.2 is limited to developers and public beta testers at this time, but as we're on the third beta, a public release could come in a few weeks to a month.

macTW
Glad to hear it’s coming and glad to hear they took their time. When it comes to charging and batteries... rushed products can have explosive effects.
Score: 27 Votes (Like | Disagree)

Mr Fusion
What's the point of wireless charging if it requires additional hardware, charges at half the speed of a conventional charger, and still requires you to place your phone in a specific location like a normal cable?

Someone sell me on this.
Score: 23 Votes (Like | Disagree)

Could you do all the different types of charging with speeds etc for better comparison please?

CarlJ
Do the iPhone 8 and X charge faster with the wireless charging if you put them in a microwave oven?
Score: 13 Votes (Like | Disagree)

Hope you guys will do a side by side between the faster wireless charging and the iPad charger (which I think is the better option compared to the usbC because of cost and only marginal improvement when moving up to the usbC).

Sure, it's something we can look into and potentially write about.
Score: 13 Votes (Like | Disagree)

What's the point of wireless charging if it requires additional hardware, charges at half the speed of a conventional charger, and still requires you to place your phone in a specific location like a normal cable?

Someone sell me on this.

I’m not saying this will be the case for you, but I personally love my wireless charger stand in my car, I just put my phone in there when I get in the car and it automatically charges, no need to fondle for cables. As for at home, I just got a charging pad for my nightstand and I must say it feels pretty great to just roll over in bed and place it on there without having to look under my bed for the cable when I’m half asleep already. But that’s just me.
Score: 12 Votes (Like | Disagree)
Read All Comments