Following a report last week that stated Broadcom was "exploring" the possibility of buying Qualcomm, which has made LTE chips for Apple's iPhone line for many years, today Bloomberg reports that this offer is moving forward. Broadcom has offered to acquire Qualcomm for $70 per share in cash and stock, in a transaction valued at a total of $130 billion. If completed, it would be marked as "the largest technology acquisition ever."

Through the deal, Broadcom would become the third-largest chipmaker in the world, behind Intel and Samsung Electronics, and the combined Broadcom-Qualcomm business would "instantly become" the default provider of certain components required to build more than one billion smartphones sold every year. The acquisition would eclipse Dell's $67 billion purchase of EMC in 2015, considered at the time the biggest in the technology industry. 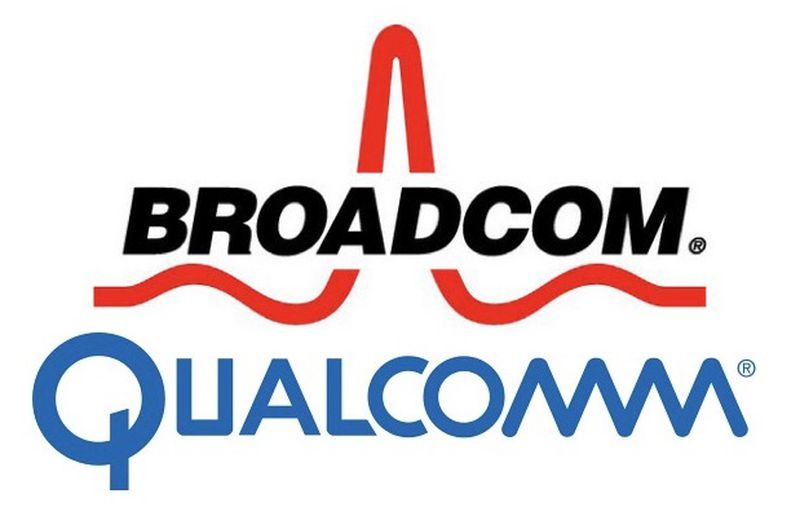 “This complementary transaction will position the combined company as a global communications leader with an impressive portfolio of technologies and products," Hock Tan, resident and chief executive officer of Broadcom, said in a statement Monday. “We would not make this offer if we were not confident that our common global customers would embrace the proposed combination.’’

In the midst of the acquisition news, Qualcomm and Apple have been embroiled in a legal battle since January after Apple sued Qualcomm for $1 billion. Apple accused Qualcomm of charging unfair royalties for "technologies they have nothing to do with" and failing to pay for quarterly rebates. As the disagreement escalated throughout 2017, with a new lawsuit emerging just last week, Apple is said to be considering eliminating Qualcomm chips from its devices completely moving forward.

However, through a newly combined Broadcom-Qualcomm company, which could bring about new management, analyst Stacy Rasgon pointed out that the acquisition could finally "smooth things over" between Apple and Qualcomm.

If Broadcom can pull off a deal, it could help smooth things over with Qualcomm’s biggest adversary. A change of management at Qualcomm might help resolve the dispute with Apple more quickly, according to Sanford C. Bernstein & Co. analyst Stacy Rasgon.

Broadcom also said that its offer stands whether or not Qualcomm completes its pending acquisition of NXP Semiconductor, which is currently facing regulatory scrutiny in Europe and resistance from NXP shareholders. Following the signing of a definitive agreement, Broadcom said it expects the proposed deal to be completed "within approximately 12 months."

Update 11/13: Qualcomm has rejected Broadcom's offer, stating the following in a press release: "It is the Board's unanimous belief that Broadcom's proposal significantly undervalues Qualcomm relative to the Company's leadership position in mobile technology and our future growth prospects."

Porco
They could rename themselves Broadqualcomcomm :D
Rating: 7 Votes

One would imagine Apple and Broadcom have exchanged comments on this already. Apple is probably pushing this behind the scenes. Status quo for Tim's Style. :apple:


More likely a mutual agreement by Qualcomm and Broadcom.

Qualcomm has 5G patents, while Broadcom wants wireless but had to exit the 5G market because they couldn’t cut it. Broadcom knows the future involves infrastructure, which is under attack from competitors like Huawei. They know they can’t fight Huawei alone.
Rating: 3 Votes

Interesting wonder if this would have any bearing on the lawsuit?

One would imagine Apple and Broadcom have exchanged comments on this already. Apple is probably pushing this behind the scenes. Status quo for Tim's Style. :apple:
Rating: 3 Votes

Jax44
Would this be a de facto monopoly for LTE chips?.
Rating: 2 Votes

Interesting wonder if this would have any bearing on the lawsuit?


I think this would tend to help to resolve matters between Qualcomm and Apple sooner. I don't mean to suggest that the ongoing legal battles would be settled overnight, they could still drag on for some time - even years. But this would, I suspect, remove a major impediment to Qualcomm and Apple reaching a broad agreement regarding their relationship moving forward. That impediment is Qualcomm's need (or, at least, perceived need) to posture in order to support its stock price and possibly in order to help it with future legal battles that it anticipates.

As it is, a large part of Qualcomm's business model - which has worked so well for a number of years - has already been torn apart. It knows that it won't be able to hold on to or recapture it. There were a number of linchpins in its chain of improper practices which worked together to allow it to, in effect, maintain a stranglehold on the industry and extort higher levels compensation for its IP and products than it otherwise would have been able to get. (Holy mixed metaphors, Batman!). A number of those linchpins have already been fatally damaged by, e.g., actions taken by various regulatory bodies. So the chain just isn't, and won't be, able to function as intended anymore.

Perhaps the most important linchpin was Qualcomm's ability to withhold certain kinds of modems, which it had an effective monopoly with regard to, unless industry players agreed to its extortive licensing terms (which covered more than just the IP related to those particular modems). That ability is now gone, because of regulatory actions and because industry players (read: Apple) finally got enough leverage (or courage) to stop complying. In the past, they might not have been able to break that hold because it would have effectively meant not being able to make certain kinds of mobile phones. Qualcomm had the leverage and used it in combination with a number of other improper practices to unilaterally impose terms. Those days are gone. Regardless of what happens as a result of other regulatory body investigations and in various ongoing legal battles, Qualcomm won't be able to put that genie back in the bottle. And it knows that, as does the rest of the industry.

Settling the details in the aftermath of Qualcomm's business model being torn asunder is another matter though. Various parties can continue to fight over those details for a long time. Qualcomm is, for the most part, wrong in the legal positions it's taken in these disputes. What's more, I think it knows that it's wrong when it comes to a number of those legal positions. But its actions of late have largely not been about winning the legal fights, they've been about what I suggested earlier - posturing. Qualcomm has been fighting a PR battle relating to investor sentiment, hoping to mitigate the damage to its stock price. (Though it has also been looking for any legal leverage it might be able to find in hopes of, eventually, being able to force a somewhat better deal for itself.)

If Broadcom acquires Qualcomm, that should remove the need for Qualcomm to posture. It should be easier for Broadcom to reach agreements with Apple and perhaps others. Broadcom no doubt understands that what Qualcomm was doing will no longer work - it will no longer be allowed (e.g. by regulators) and the leverage needed to impose it doesn't exist to the extent it used to. And Broadcom won't be as handcuffed by the past (and its own prior practices) in trying to reach deals for how things will work going forward.
Rating: 2 Votes

I was having trouble at work looking up broad.com

I was thinking the new name could be qualbroad.com
Rating: 2 Votes

Even if Apple and Broadcom haven't had discussions relating to this possible acquisition, I would expect that Mr. Cook is more pleased than displeased with this news.


No it would make Broadcom stronger and Broadcom does supply other ics and what not for Apple and WiFi chips for stuff like MacBooks too. Last thing you want is your suppliers to consolidate, you can’t bring the price down as much. WiFi chips however is one area where Intel actually is solid, the 8265ac outperforms Qualcomm’s Killer Wireless chips and Broadcom’s 2x2 chips as well. MacBooks uses a 3x3 Broadcom chip and Intel hasn’t made such chips in a while though, with the 6300abgn being the last.
Rating: 1 Votes

Must be nuts to think that.

One company owns a large number of 5G wireless patents.

The other is a leader in 5th and 6th generation WiFi solutions.


The same thing was said when Broadcom began manufacturing Bluetooth chipsets as well. Look at them now.

Unification of 1 chip to do both current and future bluetooth, wifi and LTE/5G communications on 1 die is a VERY big deal. As evidenced with manager stacked mono in iPhone X. Licensing disputes to be squashed would be a HUGE benefit.
Rating: 1 Votes

One would imagine Apple and Broadcom have exchanged comments on this already. Apple is probably pushing this behind the scenes. Status quo for Tim's Style. :apple:


Even if Apple and Broadcom haven't had discussions relating to this possible acquisition, I would expect that Mr. Cook is more pleased than displeased with this news.
Rating: 1 Votes

Qualcomm has 5G patents, while Broadcom wants wireless but had to exit the 5G market because they couldn’t cut it. Broadcom knows the future involves infrastructure, which is under attack from competitors like Huawei. They know they can’t fight Huawei alone.


This. Broadcom had to get out of the modem market because most of the world was moving to integrated CPU+modem SoCs. They had no such expertise.

But they also know that just supplying BT and WiFi chips ain't gonna cut it forever. They need to get back into the Game of Thrones :)

Unification of 1 chip to do both current and future bluetooth, wifi and LTE/5G communications on 1 die is a VERY big deal. As evidenced with manager stacked mono in iPhone X.

Licensing disputes to be squashed would be a HUGE benefit.


No more disputes between Broadcom and Qualcomm yes.

But combined they could become an even stronger licensing power for their customers to contend with.
Rating: 1 Votes
[ Read All Comments ]