Registered developers can download the fourth iOS 11.1 beta from Apple's Developer Center or over-the-air once the proper configuration profile has been installed from the Developer Center. 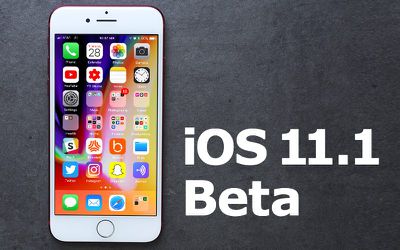 Several emoji also feature some small design changes in iOS 11.1, including the dolphin, octopus, bee, snail, and whale characters, among others. The new designs are more detailed and realistic than existing designs.

The update also introduces a fix for a Reachability bug that's been present since the release of iOS 11 and it brings back the 3D Touch App Switcher gesture that has been missing from iOS 11 since its release. With the return of the gesture, iPhone users can once again 3D Touch at the left edge of the display to bring up the multitasking App Switcher interface.

A few other small features are included in the iOS 11.1 beta. The built-in keyboard in iOS 11.1 now offers up multiple emoji symbols when using an emoji-related word, there's an updated camera icon under Restrictions, a new animation when tapping the status bar to scroll upwards, and a faster unlock animation.

As for security fixes, iOS 11.1 addresses a serious vulnerability in the WPA2 Wi-Fi standard that protects many modern Wi-Fi networks. Using a key reinstallation attack or "KRACK," attackers can exploit weaknesses in the WPA2 protocol to decrypt network traffic to sniff out sensitive information.

Though not in the developer/public beta right now, the iOS 11.1 update could introduce the Apple Pay Cash feature, which Apple employees are currently testing in a special version of the beta.

Update: There is also a new beta of iOS 11.1 available for public beta testers.

Precursor
Don't understand the point of these incremental updates where they put 5-10 new emojis every time. They coulda easily put an "emoji package" into Appstore free to download and left it to user's choice.
Score: 24 Votes (Like | Disagree)

BigJohno
I really hope they fix the stability of ios 11. By far the buggiest and slowest release to date and i'm running it on iphone 8+...
Score: 19 Votes (Like | Disagree)

Yeah sure, that would be a great headline.

No, they can't. Emojis are not random stickers. They are officially recognized characters in the Unicode Character Set (which is the One True Character Set supported by every modern electronic device - suggestions to use any older character set instead will be met with squeals of maniacal laughter from the entire tech community), and the Unicode Character Set is controlled by a standards group called The Unicode Consortium ('http://unicode.org/'). To comply with the standard, you can't pick and choose characters ("I think maybe we'll leave out the letter 'Q', because I don't like it."), you need to support the whole character set. Some Unicode Consortium committee that is responsible for Emoji, keeps approving people's requests for new Emoji. Apple is just adding images (as required) to go along with the newly assigned characters.

Now, I'm no fan of all these new Emoji. I wish they'd stop adding new ones (I wish they had stopped a couple years ago). But I'm not in charge of this. And neither is Apple. If you want to get them stopped, go find the committee in charge of Emoji, at the Unicode Consortium, and complain to them.

Now, note that this article is about a new beta release of the OS. Said release fixes a bunch of things (along with adding a few new Emoji). MacRumors chooses to illustrate the article with two pictures: one of a phone with "iOS 11.1 Beta" written next to it, and the other with a picture of the new Emoji (instead of some picture relating to any of the other fixes). Which gets people riled up. And reading. And commenting. And loading lots of pages. Does that suggest anything to you?

Blame the Unicode Consortium for there being new Emoji. And blame MacRumors for waving the red flag of new Emoji in front of your face. But neither of those is Apple's fault.
Score: 11 Votes (Like | Disagree)

Emoji's are as important to the OS as all 26 letters. If someone sends you an emoji you don't have on your OS it has to handle it in some way. User choice is still there, you can choose to use them or not.
Score: 10 Votes (Like | Disagree)

SamGabbay
Anyone want to guess that iPhone X ships with 11.1?