Starting in early October, Apple corporate employees in the United States began testing Apple Pay Cash internally in the iOS 11.1 beta, suggesting the person-to-person Apple Pay feature could be introduced in iOS 11.1 despite its current absence from the iOS 11.1 developer beta.

Apple has now expanded its internal Apple Pay Cash feature to its retail employees, making it available to a much wider range of people for testing purposes. 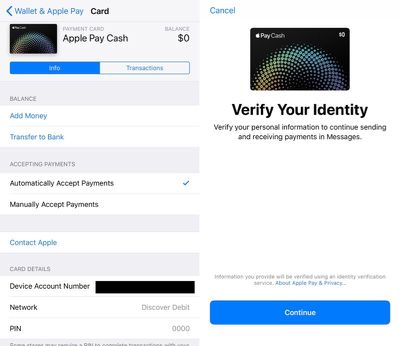 Retail employees gained access to the feature today and have been asked to install both the iOS 11.1 beta and an additional internal-only beta profile to unlock the Apple Pay Cash feature. According to the retail employee who spoke to MacRumors, Apple is also requiring iCloud accounts to be whitelisted to use Apple Pay Cash.

The Apple Pay Cash setup process can be seen in the screenshot below -- it asks customers to verify their identity with name, address, and social security number.

The Apple Pay Cash card available in Wallet is being made available through a partnership with Green Dot, a company that offers prepaid Discover cards.

For Apple Pay Cash to work, both parties need to have the feature enabled and activated. Money can only be sent in a one-on-one message, with Apple Pay Cash not available in group messages.

On the Apple Watch, the interface requires you to scroll past the Scribble icon in the Messages app to access the Apple Pay button. Tapping on it allows users to enter a dollar amount using the Digital Crown or on-screen buttons. Payment is then confirmed via a double click on the Digital Crown, but scrolling down allows for users to choose a different payment source than the default.

Apple Pay Cash is not present in the current iOS 11.1 beta available to developers and public beta testers, but given the expanded internal beta test, it appears Apple is nearly finished with the feature and is gearing up to release it as part of the iOS 11.1 update.

Kaibelf
I really feel that this particular feature will be a tipping point for many people to finally get into cashless day to day life and understand it’s not that scary.
Score: 23 Votes (Like | Disagree)

The Apple Pay Cash setup process can be seen in the screenshot below -- it asks customers to verify their identity with name, address, and social security number.

You must live a very sheltered-life. I can't find a retail shop or restaurant that I go to which does NOT accept Apple Pay.

They must live a sheltered life because they don't only go to the same places you do? That comment sounds like the situation is reversed.

I can definitely name more places that DON'T take it than do.
Score: 15 Votes (Like | Disagree)

I really feel that this particular feature will be a tipping point for many people to finally get into cashless day to day life and understand it’s not that scary.

Another way to move away from carrying cash and credit cards. It already started for me a when Apple Pay was introduced. I hardly ever take my wallet out of my pocket nowadays, albeit, the establishments I frequent offer Apple Pay, but you you made a good point that cashless day to day life is not as bad as it seems. I actually find it very convenient and efficient to use. I no longer have to deal with kids giving me the wrong change because they can't count simple math lol.

This is a personal preference so it may be different with other people and their personal experiences. I wish they would do the same with digital driver's license so I DEFINITELY don't have to carry a bulky wallet anymore.
Score: 13 Votes (Like | Disagree)

flat five
i'm certain that myself, along with a few co-workers, will use this capability pretty much every single day..
also, within my family, i think we'll use it often.
[doublepost=1507937809][/doublepost]

Do people really need to pass cash (or equivalent) back and forth that often? (I never do.)

every day at lunch..
either talk the server into giving separate checks then everybody pays individually..
or
everybody adds their share of the cash into the pot.. (never happens)
or
everybody with cash pays the person without cash who then pays the bill on a card
or
go to the bar to get change so everybody can cash out properly ("oh.. i only have twenties" -- times 5).. give cash to the one person with no cash.. (this last one is the way it usually plays out)
or
IOUs

with peer to peer apple pay.. this process becomes so much easier..
everybody just texts their portion to the one person who then pays the bill..

i'm not exaggerating-- the above scenario is a daily occurrence for me :)
Score: 10 Votes (Like | Disagree)

Talk to the banks, not Apple. They are the ones who use your SS# to verify and link direct access to a checking account, which is what this does.
Score: 9 Votes (Like | Disagree)
Read All Comments