Vanity Fair released its annual New Establishment List this week, which it has described as the top 100 so-called "Silicon Valley hotshots, Hollywood moguls, Wall Street titans, and cultural icons," and two Apple executives made the cut. 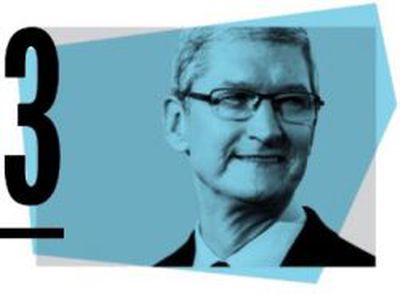 CROWNING ACHIEVEMENT
With a market cap north of $800 billion, Apple is on track to be a trillion-dollar company.

RARE DISPLAY OF MORTALITY
As consumers reject the new MacBook Pro and Apple arrives late to the game with HomePod, an Echo wannabe, the company is clinging to the iPhone for more than half of its revenue—an inauspicious strategy, since phone sales are predicted to decline.

MORTIFYING TRUMP MOMENT
Cook showed up at Trump Tower in December to kiss the ring, then went to the White House in June to try to convince Trump of the importance of coding in schools.

CROWNING ACHIEVEMENT
Launching HomePod, Apple's voice-activated virtual assistant. The product, a competitor to Amazon's Echo, may be the new hit Apple so desperately needs as interest in the iPhone wanes.

RARE DISPLAY OF MORTALITY
Planet of the Apps, Apple's foray into original programming under Cue, "feels like something that was developed at a cocktail party," according to one review.

Powell Jobs gained a majority stake in The Atlantic in July, and she's also reportedly investing in Monumental Sports & Entertainment, the owner of several Washington D.C. area sports teams. She is the widow of the late Steve Jobs.

Professional wrestler turned actor Dwayne "The Rock" Johnson, who starred in an extended Siri ad this year, broke in at 37th.

Vanity Fair's fourth annual New Establishment Summit is underway this week at the Wallis Annenberg Center for the Performing Arts in Beverly Hills, California. There, so-called "titans" of technology, media, business, entertainment, politics, and the arts discuss issues and innovations shaping the future.

NinjaHERO
I like the Macbook Pro dig. It was totally crummy to not offer us a non touchbar version with the same specs and ports as the touchbar version. Let us be the ones to choose Apple. Please.
Score: 10 Votes (Like | Disagree)

MH01
Does Tim actually know anything about product or tech? seems like a supply guy that got lucky.....
Score: 10 Votes (Like | Disagree)

Howl's Castle
I read this originally as "Tim Cook drops Eddy Cue from Apple" and got so happy for a moment...
Score: 9 Votes (Like | Disagree)

djcerla
Let’s see next January how the interest in the iPhone has “waned”.
Score: 8 Votes (Like | Disagree)

What are people's opinions on this?

I find it interesting how these kinds of publications self promote that their opinion is important.
Score: 8 Votes (Like | Disagree)

Does Tim actually know anything about product or tech? seems like a supply guy that got lucky.....

No, and that's the problem. Tim does have charisma and an admirable personality, but he's not a visionary like Jobs. Steve thought well into the future and had an amazing - almost psychic - ability to predict market responses by keeping things simple and elegant. Cook seems like a best friend who got lucky.
Score: 7 Votes (Like | Disagree)
Read All Comments

Tuesday September 27, 2022 8:05 am PDT by Hartley Charlton
An Apple Watch Ultra user has modified their new device's casing to add a brushed finish and remove the orange color of the Action Button in an effort to make it more visually appealing. The Apple Watch Ultra offers the first complete redesign of the Apple Watch since the product line's announcement in 2014, and while the design has been met with praise from many users, some have criticized...
Read Full Article • 142 comments