At an event held in San Francisco this morning, Samsung and Microsoft announced the debut of the HMD Odyssey, a headset designed to work with the Windows Mixed Reality platform.

Priced at $499, the headset offers high-resolution dual 3.5-inch AMOLED displays with a 110-degree field of view for what Samsung says is the "most immersive Windows Mixed Reality experience." With AMOLED technology, the headset offers more vibrant colors and deeper blacks for more lifelike images, and there are built-in AKG headphones for 360 degree spatial sound. 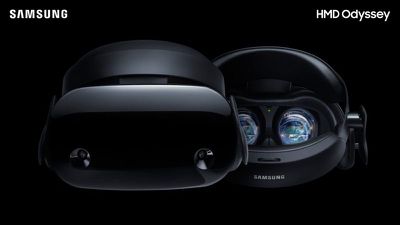 The HMD Odyssey is equipped with a Six Degrees of Freedom sensor for "intuitive and natural movements," while the headset itself features an adjustable control wheel for a snug fit on the head and the two motion controllers enable movement in the virtual world.

Apple in macOS High Sierra is planning to support eGPUs and VR content creation through Metal 2 and partnerships with Valve, Unity, and Unreal, but beyond that, ARKit is the closest thing the company has to the Windows Mixed Reality platform, and there is no comparable product to the Samsung headset.

Samsung's Odyssey Mixed Reality Headset is priced at $499, and is available for pre-order starting today ahead of a November 6 launch. A range of other Mixed Reality headsets are also available from Microsoft at prices starting at $329.

jayducharme
I sense another money loser for Samsung.
Score: 13 Votes (Like | Disagree)

deanthedev
“Virtual Reality. The next killer technology product everyone will be using.”

Repeated every year for the last 20 years. Still hasn’t come true. Kinda reminds me of Linux users claiming this to be “The Year of Linux on the Desktop.”
Score: 13 Votes (Like | Disagree)

It's highly unlikely Apple Watch is a money-loser. Sales are estimated at ~33M total, 15M in the last 12 months. Most likely on pace for well over $5B per year in revenue at this time, for most companies that would be an incredibly successful business all by itself.

Not even sure the HiFi lost money. It certainly didn't light the world on fire, but the development and production costs likely weren't outrageous either.

Pippen, well yeah, but come on, you're going back a long way there (20 years) to the dark days of Apple, lots of bad decisions back then by bad management and if I were Samsung, I certainly wouldn't want to be reassuring myself it's OK because Apple didn't sell many Pippens.
Score: 12 Votes (Like | Disagree)

KazKam
Seriously, who buys stuff like this, and then ACTUALLY USES it enough to justify the expense... beyond just a novelty or curiosity?
Score: 10 Votes (Like | Disagree)
Read All Comments