Apple is working on "several different kinds" of wearable augmented reality prototypes as it tries to figure out the "most compelling application" for an AR headset, reports Financial Times.

Citing sources with knowledge of Apple's plans, Financial Times says at least one group within Apple is pushing for a pair of glasses that feature a 3D camera but no screens, making the iPhone the main display, similar to Snap's Spectacles, but no final design decisions have been made. 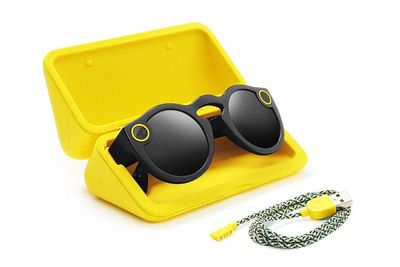 Snap's camera-equipped screen-free Spectacles
Rumors of Apple's work on AR smart glasses first surfaced in 2016, and previous rumors have suggested the glasses will connect wirelessly to the iPhone, much like the Apple Watch, and will display "images and other information to the wearer."

While Robert Scoble suggested Apple could launch the smart glasses this year through a partnership with Carl Zeiss, most rumors (like today's) suggest Apple is still in a prototyping phase and that a launch is still a ways off.

Earlier this year, Financial Times said Apple was "stepping up" development on an augmented reality wearable, but a potential launch is at least a year away or longer. Bloomberg has predicted a similar timeline, suggesting Apple is perhaps aiming to launch a product in 2018.

As Apple works on AR smart glasses, the company is preparing to make its first major move into augmented reality with the launch of iOS 11 and ARKit, a set of APIs designed to allow developers to build powerful augmented reality experiences into apps and games. When ARKit launches, the iPhone and the iPad will become the largest augmented reality platform in the world given the large number of devices already out in the wild.

Subscribe to the MacRumors YouTube channel for more videos.
Over the course of the past several months, Apple CEO Tim Cook has talked about Apple's work on augmented reality several times. Just this past week, he called it "big and profound" and said he "could not be more excited" about AR and what developers are creating with ARKit.

"This is one of those huge things that we'll look back and marvel at the start of it," he said.

ipedro
AppleWatch + AirPods + Apple Glasses are the holy trinity that will inevitably replace the iPhone with wearable tech.
Score: 11 Votes (Like | Disagree)

sp3k0psv3t
I truly think I’m with Apple on taking their time here.

Get ARKit going with developers and immersed in the ecosystem. Then tie it in with the glasswear item.

AppleWatch + AirPods + Apple Glasses are the holy trinity that will inevitably replace the iPhone with wearable tech.

Hmmm I think you're onto something.
Score: 5 Votes (Like | Disagree)

MadeMyDay
You mean the lenses aren’t shaped like apples?

fokmik
glasses that feature 3D camera but no screens, making the iPhone the main display

So whats the point then? Why are these different from normal glasses?
[doublepost=1501880015][/doublepost]You have a camera on the glasses just to see what you see on the iphone display? How is this not dumb?
Score: 2 Votes (Like | Disagree)

AppleWatch + AirPods + Apple Glasses are the holy trinity that will inevitably replace the iPhone with wearable tech.

This is most likely but I believe the phone will be more like a cpu by then. Doing the heavy data crunching and storage. Watch, Airpods and Glasses will be your I/O.
Score: 2 Votes (Like | Disagree)
Read All Comments