Apple is reportedly seeking to move its original content division to an iconic California studio where movies like Gone With The Wind and The Matrix were shot, in order to serve as a base for its big push into Hollywood production.

According to the Financial Times, Apple is interested in leasing space at The Culver Studios, which was built by silent movie pioneer Thomas Ince and counts RKO, Howard Hughes and Cecil B DeMille among its former owners. The studio is close to Sony Pictures' studio lot in Culver City, as well as Beats, the audio group Apple bought two years ago. 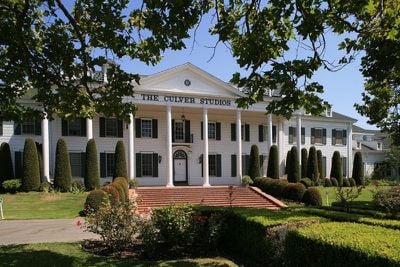 Leasing at The Culver Studios would give Apple room to expand, as it hires top Hollywood talent, according to three people familiar with the discussions. The site has 13 soundstages up to 32,000 sq ft in size that can accommodate TV show shoots and full-length feature film work. But Apple is mainly looking for office space, albeit in an iconic location that signals their ambitions to become a big player in Hollywood.

Apple and The Culver Studios declined to comment on the report, but the move makes sense given that Apple recently set aside $1 billion to acquire and produce original television content over the next year to compete with the likes of Netflix and Amazon.

That budget is said to be controlled by Hollywood veterans Jamie Erlicht and Zack Van Amburg, who were hired by Apple in June from Sony to oversee content acquisition and video strategy. Apple also recently hired former WGN America President Matt Cherniss to oversee development of the company's worldwide video unit. Erlicht and Van Amberg oversaw the production of hit shows like Breaking Bad and The Crown, while Cherniss previously worked with the two to bring the Sony shows Underground and Outsiders to WGN.

One of the first acquisitions Apple is said to be vying for is a "high-profile drama" starring Jennifer Aniston and Reese Witherspoon, set on a morning TV chat show, according to FT. The company is reportedly bidding against Netflix and others for rights to the drama, according to people familiar with the discussions, indicating that Apple is looking to procure premium productions similar to those found on HBO.

At the same time, Apple is struggling to catch up with its rivals in the original content space and is still looking to get at least one hit under its belt, with recent video efforts "Planet of the Apps" and "Carpool Karaoke" released on Apple Music generally failing to excite audiences. Meanwhile, the company's Apple TV set top box has lost market share to rivals like Roku, Amazon's Fire TV, and Google's Chromecast due to its high price and lack of 4K content.

Despite challenges, the scale of Apple's new budget and hiring efforts are said to be making some in Hollywood believe that this time the company is more committed to breaking into the film and TV industry. Apple is also rumored to be releasing a new Apple TV with support for 4K content and HDR video output at its upcoming media event on September 12.

FSMBP
Why does Apple need to produce content? They are turning into Sony (i.e. in the 90s) and they are losing focus. Jack of all trades, master of none.
Score: 17 Votes (Like | Disagree)

Why does Apple need to produce content? They are turning into Sony (i.e. in the 90s) and they are losing focus. Jack of all trades, master of none.

Smartwatches, smartphones, tablets and digital music stores are four "trades" they are masters of at this moment in time.

Tim is lost in space and has stars in his eyes. He is like the son who gets an inheritance and blows it.

If I gave my son an inheritance and this is how he blew it, I'd be totally fine with that.

lkrupp
Oh my, Tim Cook. The Culver Studios is where Gone With The Wind was filmed. You know, that racist, Confederacy loving movie that is now being banned from showing in theaters because of its offensive content.
Score: 8 Votes (Like | Disagree)

Tim is lost in space and has stars in his eyes. He is like the son who gets an inheritance and blows it.

I think the more apt analogy is that TC is like the son who tries to grow from under his father's shadow but can never get there. I mean TC isn't sitting on his laurels. He's trying to come up with new things. It's just his new things are either half-baked or far fetched and out of his depth. He is making money on the old Job's-era categories so he's not blowing it, just kind of fumbling and lucky he has the iPhone.
Score: 7 Votes (Like | Disagree)

blueflame
If apple is fighting for a piece of the content pie. Why start with a bunch of crappy reality channel stuff?
Score: 7 Votes (Like | Disagree)

Apple have been "doomed" every year since 1976.

Here's to their being "doomed" for the next 40+ years, cheers!

Bit of revisionist history. Apple started floundering just before Jobs was removed the first time until he was brought back in '97. Sculley, Spindler, Amelio were disasters that pushed Apple to being days away from bankruptcy. Make no mistake Apple was "doomed" in 1996.

But MS funded Apple to keep it alive and some competition (it was in the midst of an antitrust action) and the BOD crawled back to Jobs because it recognized only his NeXT OS could save Apple after it was clear Apple's Copeland project was an unfixable hot mess.

Even after Jobs returned it took him about 10 years for the stock to go from a split adjusted .70/share to $12. Jobs turned around Apple's image with the iMac, the iBook, The TiBook, Airport, iPod and iTunes Store, and other goodies. But Apple really only became a true powerhouse when the iPhone was announced. In the 10 year period between the iPhone announcement and now AAPL has gone from a split adjusted $13 to $164.

Those of us who have had the "privilege" of knowing Apple for its entire existence understand Cook is no Jobs -- hard to duplicate him, but does have traits of the CEO's that followed Jobs when he left Apple in the 80s.
Score: 5 Votes (Like | Disagree)
Read All Comments