Apple today announced that television executives Jamie Erlicht and Zack Van Amburg will be joining the company to help craft its new slate of original video programming. The two will lead Apple's video programming efforts on a worldwide scale and report to senior vice president of internet software and services, Eddy Cue. 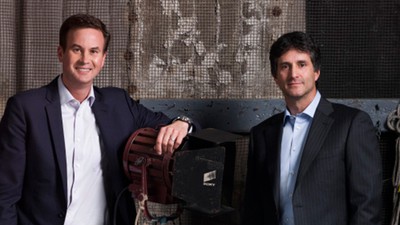 Image via Variety
Erlicht and Van Amburg are joining Apple from Sony Pictures Television, where they were presidents of the company since 2005 and helped produce shows like AMC's Breaking Bad
and Better Call Saul, Netflix's The Crown, Amazon's Sneaky Pete, and more.

Erlicht said that he and Van Amburg will attempt to create content of "unparalleled quality," matching Apple's success in its other product categories.

“Jamie and Zack are two of the most talented TV executives in the world and have been instrumental in making this the golden age of television,” said Eddy Cue, Apple’s senior vice president of Internet Software and Services. “We have exciting plans in store for customers and can’t wait for them to bring their expertise to Apple — there is much more to come.”

“It will be an honor to be part of the Apple team,” said Jamie Erlicht. “We want to bring to video what Apple has been so successful with in their other services and consumer products — unparalleled quality.”

“Apple has a relentless focus on delighting customers with their products,” said Zack Van Amburg. “We will bring that same intention to Apple’s programming and we could not be more excited about what lies ahead.”

The hiring announcement today represents Apple's latest move into establishing its presence in the original TV production space, and comes on the heels of the debut of the company's first show on Apple Music called Planet of the Apps. Later this summer, Apple Music will also debut Carpool Karaoke: The Series as its next streaming show.

In today's press release, Apple talked up the pair's history for creating diverse content -- from sitcom The Goldbergs to supernatural action comedy Preacher -- but no word was given on the specific kind of television that Erlicht and Van Amburg would be working on for Apple, or when any of the shows they produce might be coming out.

fourthtunz
They lost me at "talented TV executives"
I threw up in my mouth a little.
Score: 11 Votes (Like | Disagree)

And another TV content provider will arise with it's own subscription. So to see all your favorite TV shows you need:
- Your cable subscription
- Netflix
- Amazon Prime
- Apple TV (soon)

This fragmentation isn't helping anyone. I'll steal my stuff from torrents again and buy the show on DVD if I like a show.

MistrSynistr
Nothing's funnier knowing this will be for Apple Music and not Apple TV.
Score: 5 Votes (Like | Disagree)

rawweb
Let's hope they have a new Mac Pro and Pro Display to edit this new 'original content' with. ;)
Score: 5 Votes (Like | Disagree)

Bokito
And another TV content provider will arise with it's own subscription. So to see all your favorite TV shows you need:
- Your cable subscription
- Netflix
- Amazon Prime
- Apple TV (soon)

This fragmentation isn't helping anyone. I'll get my stuff from torrents again and buy the show on DVD if I like a show.
Score: 5 Votes (Like | Disagree)

I wonder if Apple: knows how many failed projects this pair produced well working at Sony? Having worked with these two several years ago at Sony I can tell you firsthand that they play the numbers game. The more crap they throw against the wall they hope that one or two stick. Google "Gay Robot" and see what results come up that this pair tried to sell to the public while at Sony.

Monday June 14, 2021 12:50 pm PDT by Juli Clover
Some M1 iMacs appear to have a manufacturing defect that causes the display to be mounted on the stand in a way that's not perfectly aligned, leading to a crooked display. YouTuber iPhonedo over the weekend published a review of the M1 iMac, and he found that his machine appeared to be tilted on one side, a mounting disparity that was visibly noticeable and proved with a ruler. Another...
Read Full Article • 246 comments