Apple's upcoming "iPhone 8" will be available to order in three storage capacities and with the same amount of working memory as the current iPhone 7 Plus, according to a new post on Chinese microblogging site Weibo (via Techtastic.nl).

The minimum storage capacity for Apple's OLED iPhone is said to be 64GB, with a 256GB option offered as the mid-tier capacity and a 512GB option at the highest tier, while 3GB of RAM is claimed to be included across the board. 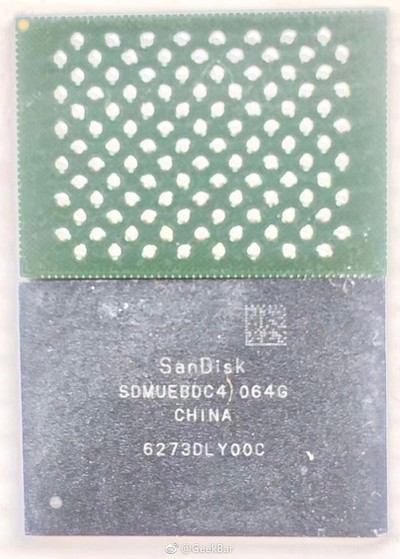 Weibo poster GeekBar included the above image of an alleged iPhone 8 NAND flash 64GB memory module manufactured by SanDisk, which will also supply some 256GB modules, according to the source. Toshiba is also referenced as a supplier of both capacities, while Samsung and SK Hynix are said to be making the 512GB modules.

This is the first time SanDisk has been referenced as a NAND supplier for Apple's OLED iPhone, while Toshiba, Samsung, and SK Hynix have all been cited previously as suppliers of NAND flash chips. Earlier rumors have suggested the iPhone 8 will include increased storage space, making the device more expensive than previous-generation models, although previous additional reports claimed only that the phone would be available in 64 and 256GB capacities.

Reliable KGI Securities analyst Ming-Chi Kuo has also put the iPhone 8's memory at 3GB of RAM, while the larger iPhone 7s Plus is expected to remain at 3GB RAM and the smaller iPhone 7s will continue to offer 2GB RAM. Kuo claimed the DRAM transfer speed of the three new models will be faster than the iPhone 7 by 10 to 15 percent for better augmented reality performance.

Today's alleged photo leak follows several others in the last couple of weeks. They have included a 3D sensing camera module, an A11 processor, wireless charging pad components, and an OLED display assembly and flex power cables. Apple is expected to debut its "premium" redesigned 5.8-inch iPhone in the first half of September alongside upgraded (but standard) 4.7 and 5.5-inch iPhones.

sunapple
I hope the phone is fully water proof for the eye-watering prices of such high storage options.
Score: 27 Votes (Like | Disagree)

exactly. They know everyone going for the pro model will dish out the extra cash. With 4K video recording, 64 is barley passable.

Barely passable? What are you recording, your whole day? I think the battery runs out before your memory is full. Also cloud storage.
Score: 21 Votes (Like | Disagree)

I remember that reaction with the Mac 512K.
Score: 16 Votes (Like | Disagree)
Read All Comments

Monday July 13, 2020 6:50 am PDT by Joe Rossignol
Earlier this year, Apple agreed to settle a U.S. class action lawsuit that accused the company of "secretly throttling" older iPhone models. Now, eligible iPhone owners are beginning to be notified about their legal rights and options. Under the proposed settlement, Apple will provide a cash payment of approximately $25 to each eligible iPhone owner who submits a claim, with its total payout ...
Read Full Article • 132 comments