The images, later shared via Slashleaks, are said to include the phone's OLED display assembly, internal components for the Lightning connector and flex cables for transferring power to other components. 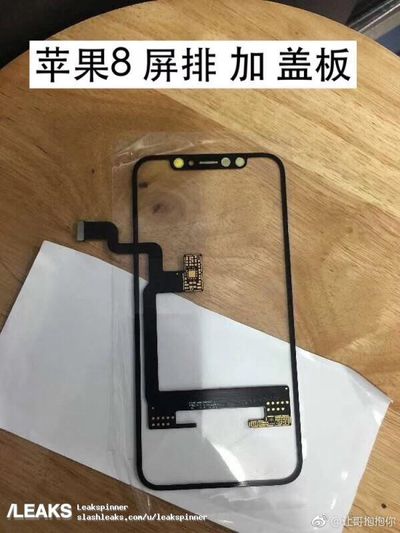 While we can't vouch for the authenticity of the photos, it's not unusual for leaked parts and components to steadily trickle out of assembly plants as Apple ramps up production ahead of an iPhone launch. For example, just last week we saw images of an alleged A11 processor and wireless charging pad components, both of which are expected to debut in Apple's radically redesigned OLED iPhone.

Earlier this month, images were shared online showing manufacturing validating tests for the iPhone 8, while videos were also shared purporting to show an iPhone 8 production line at an unidentified factory, presumably in China, although the veracity of said videos remains contentious.

Apple is expected to announce iterative "S" cycle upgrades to its existing iPhone 7 line-up next month, but with the potential for new glass backs and a wireless charging capability in addition to the usual moderate internal improvements.

As for the all-new 5.8-inch iPhone 8, which could still take a different name, Apple is expected to debut a virtually bezel-free edge-to-edge handset with an OLED screen, a glass back, a vertically oriented dual-lens camera, and a steel frame, all for a more premium feel and price tag – possibly in the $1000 range.

Based on details unearthed in Apple's HomePod firmware, the device will have a notch at the top of the display that will house the sensors and camera, and will do away with the traditional physical Home button in favor of a virtual one, with a facial authentication system likely replacing Touch ID fingerprint recognition.

The new iPhones are thought to debut in black and silver colors, plus a new copper-like option, possibly called "Blushed Gold". Based on the launch schedules of previous years, Apple is expected to announce the phones at an event falling in the first two weeks of September. You can read more on everything we know so far about Apple's upcoming iPhone 8 event in our dedicated roundup.

PlainviewX
Calling it "edge to edge" is a misnomer. That bezel on the left and right looks to be nearly the same size as an iPhone 7. "Edge to edge" because it lost the chin and forehead?
Score: 8 Votes (Like | Disagree)

Still don't like the bezel for the camera, speaker, etc. i hope this will come out nice in the actual model. I haven't replaced my iPhone 6. Cannot find a reason to replace unlike before, I usually upgrade with a new design.

It’s got the least bezel of a phone design than any phone. And I had the S8 with it’s top an bottom bezel.

If you have a problem with that tiny cut out boy you’ll never be pleased then cause no ‘bezel less’ phone is completely bezel free. We’re just not there yet tech wise.
Score: 7 Votes (Like | Disagree)

LOOOL thats a concept video not a leaked component to an ACTUAL device.
Score: 6 Votes (Like | Disagree)


iPhone 8 Display size compared with iPhone 7. It is just the bare screen and not the entire body.

Where is this phone being sold? And is it being sold in mass quantities?
Score: 3 Votes (Like | Disagree)

Will0827
It would be cool if Touch ID was done on the power button, akin to the macbook pro. That way its not on the back as many have shared dislike in and not completely gone until it can be done within the screen.
Score: 3 Votes (Like | Disagree)
Read All Comments