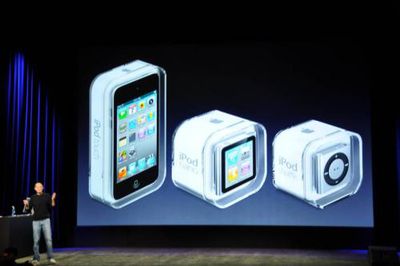 Along with announcing iOS 4.1 and the forthcoming iOS 4.2 for the iPad, Apple announced all-new iPod models at today's keynote event.

The new iPod shuffle will see the return of buttons and will still include the VoiceOver feature that debuted in the last Shuffle model. It also has playlists capability and will take advantage of the Genius Playlists recently introduced. It will have 15 hours of battery life and will come in 5 colors: silver, pink, gold, blue, and green. The 2 GB Shuffle will cost $49.

The iPod nano has also been updated, removing the click wheel and adding a multi-touch interface to reduce the device's overall size. The new nano is 46% smaller than its predecessor and will have 24-hour battery life.

The nano's new touch interface is similar to that of other iOS devices with a home screen populated with icons to access photos, artists, playlists, control playback, and more. The display's orientation can be manually rotated to accommodate the device's position when clipped to clothing. The nano will come in graphite, pink, blue, silver, green, gold, and a Product Red version will also be offered. It will cost $149 for 8 GB and $179 for 16 GB.

All new iPod models will be available starting next week and are available for pre-order on Apple's site today.

840quadra
The 10.5.8 requirement for OS X on all these new devices is quite disappointing. Why are they supporting XP (released in 2001), but not OS X Tiger (Released in 2005)?
Score: 1 Votes (Like | Disagree)
Read All Comments