iPhone owners are largely satisfied with Apple's CarPlay, according to a new report from market research firm Strategy Analytics. 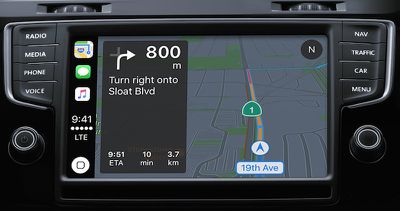 The report is available to Strategy Analytics clients only, but author Chris Schreiner shared some of his findings with MacRumors.

31 percent of users said they were "very satisfied" with CarPlay, while 54 percent said they were "satisfied," for an overall customer satisfaction rate of 85 percent. However, the report only looked at 70 owners of 2016-2017 vehicles with CarPlay installed in the United States, which is a rather small sample size.

43 percent of those users are "very likely" to recommend CarPlay to others, while 37 percent are "likely" to recommend it, said Strategy Analytics. Those with CarPlay were likely to use it for "all or most" of their in-car infotainment needs, often in favor of their vehicle's standard system, according to the report.

"Given Apple's continued updates to CarPlay enhancing the experience further, and car-makers' inability to do the same along with their long development times, CarPlay is poised to handle the vast majority of consumers' in-vehicle needs," said Schreiner, Director of Syndicated Research at Strategy Analytics.

While customer satisfaction with CarPlay might be strong, Apple's in-car software platform is far from perfect.

Last month, a side-by-side test of CarPlay and Android Auto showed Siri was often unable to properly interpret what the driver was saying, which in one case led Apple Maps to incorrectly navigate him to an address in Tennessee rather than Toronto. Android Auto, meanwhile, interpreted voice commands correctly.

Video courtesy of YouTube channel The Straight Pipes via Daring Fireball
CarPlay continues to improve in other areas. In iOS 10.3, for example, Apple provided drivers with a quicker and safer way to switch between apps without having to take their eyes off the road for long periods of time. Wireless CarPlay is also now available in select BMW models, or with Alpine's aftermarket system.

Apple is also rumored to be working on "enhanced" Siri capabilities for the iPhone, and those improvements would likely extend to CarPlay.

CarPlay is now available in over 200 vehicle models in the United States, enabling drivers to make and receive calls, access text messages, play music, get directions, check traffic conditions, and more with Siri voice commands and on-screen controls. The platform requires an iPhone 5 or newer.

Aftermarket systems are available from brands such as Alpine, Kenwood, and Pioneer for do-it-yourself CarPlay installations.

69650
Apple can add as many new features to Siri as they want but if it doesn't understand what you're saying it's still useless.
Score: 35 Votes (Like | Disagree)

Then those 85% haven't used it all that much or they are so Apple-blind that nothing Apple does could ever be bad.

I use it twice a day: to and from work. One hour drive each way.

For example, after 6 months of continuous use, I have learned to not bother with trying to respond to texts. It always ends up with me super frustrated and the person (if it even responds to the right one) calling me because they have no idea what I'm trying to tell them.

Don't even get me started with Maps.

It's a half-baked feature and Apple doesn't care. It will eventually go the way of the Mac.
Score: 13 Votes (Like | Disagree)

Jacub W. pronounced "Yacub(p) using Siri, THEN pronouncing it "Jacob" on Android will OBVIOUSLY work in Androids favor.
I guarantee Android Auto would also have no idea who "Yacub(p)" is!

Wow, I am shocked how unfair that test was.
Seriously, use Android Auto, make a contact for Jacub and ask it to call "Yacub(p)" good luck making the call.
****ing dummies!!!!
Score: 13 Votes (Like | Disagree)

whatgift
I'm new to Carplay, finding it works really well, and have no problems with Siri at all!

What it needs for me is to allow third party navigation apps, then it will be awesome!
Score: 12 Votes (Like | Disagree)

Apple can add as many new features to Siri as they want but if it doesn't understand what you're saying it's still useless.

My wife uses CarPlay & SIRI to text from her car all the time..... It takes me a lot of guessing of what she's trying to say most of the time :-)
Score: 6 Votes (Like | Disagree)

CaryMacGuy
I really want to see Apple open up CarPlay to 3rd party mapping providers. I hope this is coming in iOS 11. Apple Maps is ok but in my opinion, Google Maps is an order of magnitude better. Also I think having the ability to use Waze in the dash would be awesome.
Also I think they could change the home screen of CarPlay to provide different information in one view. On that screen, they could also support Apple Watch like "complications." An example of this for me would be showing my current blood glucose reading from my Dexcom glocuse monitor (which would be really useful when driving).
Score: 6 Votes (Like | Disagree)
Read All Comments