Thursday October 13, 2016 2:58 pm PDT by Juli Clover
BMW today unveiled its 2017 BMW 5 Series Sedan, which will be one of the first cars to include wireless CarPlay support. According to press materials released today, iPhones will be able to wirelessly integrate with the BMW iDrive system, connecting to the car over Bluetooth instead of through a Lightning cable. 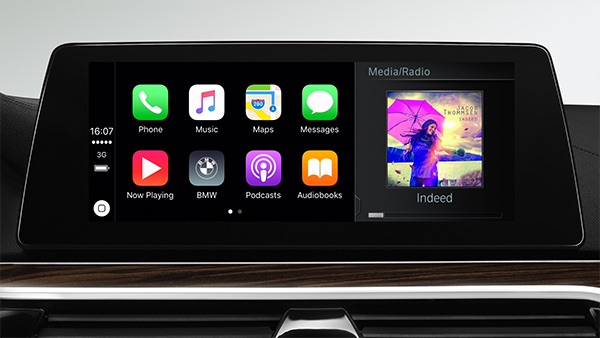 CarPlay is available in the BMW 5 Series Sedan too. Integrating the smartphone into the vehicle's system environment allows the phone, together with any apps that are on it, to be operated via the screen in the car by means of the iDrive Controller or touch control. BMW is the first carmaker to integrate Apple CarPlay without any cables at all.

Wireless CarPlay functionality was first introduced by Apple in 2015 alongside iOS 9, but thus far, no in-car infotainment system has been released that fully supports the feature.

The current CarPlay setup requires users to connect an iPhone to a vehicle using a Lightning cable that plugs into a standard USB port.

The 5 Series Sedan will be available around the world starting in February of 2017.

StoneyG
I don't understand most people's obsession with wireless everything. What is so wrong about a cable? Especially in a vehicle, where you're gonna want to charge your phone anyway.
Rating: 12 Votes

gspannu
Incorrect information regarding first car to support this option.

Here is another article from Mac Rumors stating the same.
https://www.macrumors.com/2016/08/01/bmw-2-series-carplay/
Rating: 11 Votes

Volkswagen attempted to demo wireless CarPlay functionality in January of 2016, but Apple said no.


Maybe because VW is a toxic brand and Apple didn't want to be associated with them...
Rating: 5 Votes

I don't understand most people's obsession with wireless everything. What is so wrong about a cable? Especially in a vehicle, where you're gonna want to charge your phone anyway.

Wireless is much more convenient. Simple as that.
Rating: 4 Votes

Totally agree. Bluetooth will sound bad through the cars upgraded speaker system PLUS it's great to have the phone charging.


I never understood this argument. Bluetooth sounds just fine in every audio application I've used it for. I use Bluetooth audio in my car and I hear no noticeable sound quality difference vs plugged in. And yes, I do have an upgraded "premium" audio system in my car. My preferred setup is bluetooth for the data connection (I don't have CarPlay) and plugging into a standalone 12v plug car charger for power. The USB ports in most cars don't supply enough amperage to quickly charge a phone anyways.

Cue the audiophiles saying they can of course hear the difference because their hearing is so acute.
Rating: 4 Votes

Tell that to Mazda:rolleyes:
Rating: 4 Votes

I don't understand most people's obsession with wireless everything. What is so wrong about a cable? Especially in a vehicle, where you're gonna want to charge your phone anyway.


Well it's nice to just leave the phone in your pocket and never take it out, especially if you are in and out of the car for long trips. I don't understand what's difficult to understand.

But this is awesome, hopefully it gets to other cars as well. I just hope Waze gets off their duff and updates their app for carplay.
Rating: 3 Votes

What is so wrong about a cable? Especially in a vehicle, where you're gonna want to charge your phone anyway.


I like to hop in my car, have bluetooth connect, and it starts playing my music. The iPhone never even has to leave my bag or pocket. When I get to work, I just leave the car. iPhone is already where it needs to be.

Wireless gets rid of cables laying around, reduces wear and tear on the charge port, and changes the hookup procedure from a few steps to none. Can you not see why some people might like that?
Rating: 3 Votes

Twimfy
I'm hoping we'll see wireless units available to purchase soon. I nearly took the plunge and had a Pioneer double DIN unit fitted to my MX5 but the cable put me off, I have a really good phone mount as is and plug in via AUX and the 6S Plus screen isn't far off having CarPlay especially seeing as it's so close in such a small cabin.

That said I don't plug my phone in at all unless I need Sat Nav so a wireless CarPlay option without having to buy a new car would be an instant purchase for me. I'd like to see better performance from some of the options too, every demo unit I've tried, the responsiveness of the touch and UI speed has been lacking.
Rating: 3 Votes

xizdun
About time Apple and BMW started working closer to better integrate their products. How much longer before I can use the Waze app on my BMW iDrive display?
Rating: 3 Votes