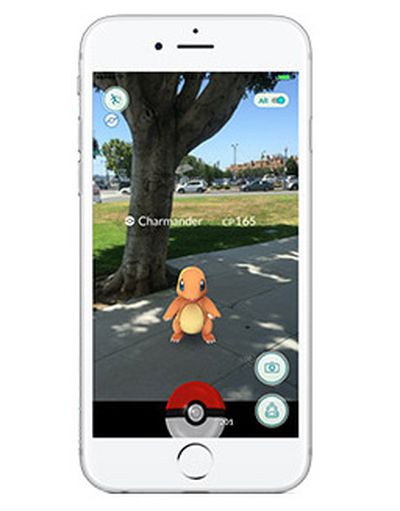 Augmented reality could be the "next big thing" for Apple, according to the latest research from UBS analyst Steven Milunovich.

Milunovich believes that Apple could equip the iPad and iPhone with AR-enabled hardware such as sensors, 3D cameras, and custom chipsets over the next two to three years.

He speculates the iPhone 8, for example, could have "moderate 3D mapping using stereoscopic vision" based on a technology called Simultaneous Localization and Mapping.

An excerpt from his research note obtained by MacRumors:

SLAM solves the chicken and egg problem of mapping a space without prior knowledge. The device starts from one angle and collects points of data. As the device moves, it observes how objects shift and begins to fuse data to create an environment. As the 3D map is forming, the device begins to understand its own positon in the context of the environment it is trying to map.

SLAM underlies most of the advanced AR technologies available today and will likely be critical in the future. In 2015, Apple bought software company Metaio, which had one of the most advanced SLAM-based AR engines available at the time. The company has been silent since being acquired, but according to our industry checks it's likely the core team has remained and the IP could play a key role in Apple's strategy.

Milunovich, citing "some industry sources," added "there may be over 1,000 engineers in Israel working on projects that could be related to AR," but he expects Apple to slowly roll out augmented reality features until the technology becomes more mainstream and "reaches a level of maturity suitable for Apple's brand."

Milunovich said that because new technologies must fit within and grow the Apple ecosystem, the company will likely release an augmented reality SDK that is tightly integrated with iOS.

Beyond the next two to three years, Milunovich thinks an additional AR-enabled hardware device is possible, citing tech evangelist Robert Scoble's belief that Apple will launch a pair of smart glasses in partnership with German optics company Carl Zeiss. The report said the glasses could launch as early as 2017.

In November 2016, Bloomberg likewise reported about Apple working on a pair of smart glasses that would connect wirelessly to the iPhone and display "images and other information" to the wearer.

Scoble recently told MacRumors that Apple is "readying a three-ounce pair of glasses that pair with the iPhone 8 for mixed reality." He insists that "mixed reality," which he refers to as "next-generation augmented reality," will be key to Apple's future products. Treat this info with a proverbial grain of salt for now.

Apple CEO Tim Cook has repeatedly expressed his interest in augmented reality. He recently said AR is "a big idea like the smartphone," but noted "there are things to discover before that technology is good enough for the mainstream." In the past, he said AR is "profound" and should "amplify" human contact.

Then again, I don't know anyone that still plays Pokemon go at all..
Score: 3 Votes (Like | Disagree)

canny
Macs are not capable of developing for either VR or AR... their GPUs are far too poor. Another self-inflicted injury from Tim Cook.
Score: 3 Votes (Like | Disagree)

LordQ
A smartwatch I'd use, but smartglasses? Pass.
Score: 2 Votes (Like | Disagree)

nwcs
AR glasses. Another iteration of something that is a solution in search of a consumer problem.
Score: 1 Votes (Like | Disagree)

Sunday January 23, 2022 10:32 am PST by Juli Clover
Apple is working on a number of new products that are set to launch this fall, and Bloomberg's Mark Gurman says that it will be "the widest array" of new devices that Apple has introduced in its history. In his latest "Power On" newsletter, Gurman explains that Apple is working on four new flagship iPhones (iPhone 14, iPhone 14 Max, iPhone 14 Pro, and iPhone 14 Pro Max), an updated low-end Ma...
Read Full Article • 247 comments

Sunday January 23, 2022 2:59 am PST by Tim Hardwick
Apple has always emphasized the depth of thought that goes into the design of its products. In the foreword to Designed by Apple in California, a photo book released by the company in 2016, Jony Ive explains how Apple strives "to define objects that appear effortless" and "so simple, coherent and inevitable that there could be no rational alternative." But every once in a while even Apple...
Read Full Article • 408 comments

Monday January 24, 2022 9:20 am PST by Juli Clover
AT&T today announced the launch of upgraded AT&T Fiber plans, which support speeds of up to 5 Gigabits for some customers. There are two separate plans, one "2 GIG" plan and one "5 GIG" plan, available to new and existing AT&T Fiber subscribers. According to AT&T, the new plans are available to nearly 5.2 million customers across 70 metro areas including Los Angeles, Atlanta, Chicago, San...
Read Full Article • 185 comments

Monday January 24, 2022 7:12 am PST by Sami Fathi
Three months after their launch, the 14-inch and 16-inch MacBook Pros continue to experience high demand and seemingly short supply, with shipping dates for both models stretching into multiple weeks in several of Apple's key markets. In the United States, the baseline 14-inch MacBook Pro with the M1 Pro chip is estimated to ship in three to four weeks, promising an arrival by at least...
Read Full Article • 165 comments