Apple CEO Tim Cook has been on a whirlwind of a trip in Europe this week, making stops in France, Germany, and the United Kingdom to meet with everyone from students and developers to Apple retail employees and government officials. 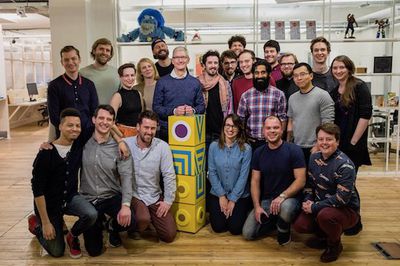 On Thursday, Cook visited the Ustwo Games offices in London to meet the creators of popular iPhone game Monument Valley. There, he later sat down for a chat with The Independent's David Phelan to discuss a wide variety of topics, ranging from Apple's hardware roadmap to augmented reality.

Responding to a question about how difficult it is to stay ahead of the curve, and to put the right hardware in place for the next generation of developers, Cook said Apple will "continue to push" not only on the hardware side, but also on the software side with its Swift programming language.

We try to continually push ourselves to do more and more, not just on the hardware side but also in terms of developers’ tools so they can take advantage of the hardware that’s there, in the best way. That’s the heart of what the coding software Swift is about. We’ve created the language and our hope was that you can get a lot more people coding, and then secondly have people push more to take advantage of the latest hardware.

Cook said the importance of Apple being able to design its own hardware is "rising exponentially" due to things like machine learning and the company's desire to "maintain a level of privacy" for its users.

In terms of augmented reality, Cook reiterated that he is "excited" about the technology because it "allows individuals to be present in the world but hopefully allows an improvement on what’s happening presently." But he added there are "things to discover" before the technology is "good enough" for the masses.

I regard it as a big idea like the smartphone. The smartphone is for everyone, we don't have to think the iPhone is about a certain demographic, or country or vertical market: it’s for everyone. I think AR is that big, it’s huge. I get excited because of the things that could be done that could improve a lot of lives. And be entertaining. I view AR like I view the silicon here in my iPhone, it’s not a product per se, it’s a core technology. But there are things to discover before that technology is good enough for the mainstream. I do think there can be a lot of things that really help people out in daily life, real-life things, that’s why I get so excited about it.

Cook said the developers, among others, he met on his trip were "incredibly uplifting," particularly with Brexit looming in the United Kingdom.

You can really see the start-up community gaining momentum. That’s important any time but with Brexit hanging over – from some people’s point of view – it’s even more important that these stories get out where people have something to look at and say “You know, times are not really awful, there’s some great things happening.” It gives me a lot of energy to talk to developers, or meet students in classrooms who are using our technology to help learn faster and better. Watching them pursue their passion.

Earlier today, Cook visited the BRIT School for Performing Arts and Technology to check out students' digital design work. He also visited the Woodberry Down primary school and met with London mayor Sadiq Khan to discuss access to talent, digital skills, and Apple's investment in the city.

Santabean2000
Talk is cheap Tim. Let us smoke some of your magic pipe already.
Score: 24 Votes (Like | Disagree)

Naraxus
"We try to continually push ourselves to do more and more, not just on the hardware side but also in terms of developers' tools so they can take advantage of the hardware that's there"

I think this has been proven to be demonstrably false over the last five years Cook. You're coasting on the legacy that your predecessor left you and it's showing.
Score: 23 Votes (Like | Disagree)

MH01
guy honestly thinks he is a celebrity. Which explains apple's direction
Score: 23 Votes (Like | Disagree)

And Tim is, sadly, absolutely right.

matt_and_187_like_this
Tim Cook is an idiot who is ruining Apple..
Score: 15 Votes (Like | Disagree)
Read All Comments