Sunday November 24, 2013 3:44 pm PST by Richard Padilla
Apple has confirmed its acquisition of Israeli 3D body sensing firm PrimeSense, reports AllThingsD. The move comes after months of speculation, as Apple was first reported in July to be looking to acquire the firm behind the original 3D body sensing technology used by Microsoft for its Kinect platform. The negotiations gained notoriety again earlier this month as Apple was said to be on the verge of a deal, agreeing to purchase PrimeSense for approximately $345 million, but was held up due to a final legal issue. 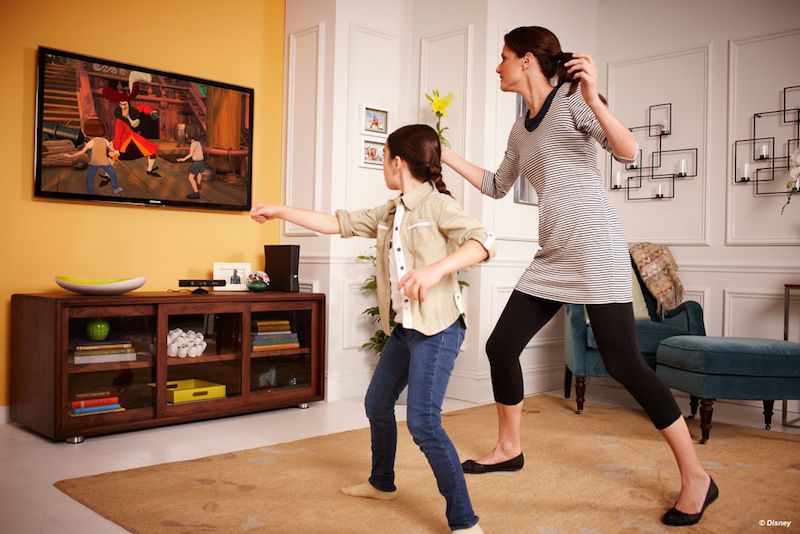 Apple spokeswoman Kristin Huguet confirmed the PrimeSense deal with the boilerplate comment the company typically provides when news of one of its acquisitions leaks: “Apple buys smaller technology companies from time to time, and we generally do not discuss our purpose or plans.”

The report also notes that while PrimeSense became known for developing Microsoft's first-generation Kinect sensor, Microsoft has since deployed its own homegrown sensor technology for the current generation Kinect, which currently ships with the Xbox One.

Apple has expressed interest in Kinect-like motion control of such products as appliances and vehicle instrumentation, but the main area where the company has been rumored to be using the technology is in television. Reports have indicated that Apple is looking at Kinect-like motion control for its future television set, although the project is said to be seeing continuing delays due to difficult content negotiations with Apple shifting its near-term focus to wearables such as the "iWatch."

Well, ****** Kinect tech was the beginning of the end for Xbox, so I hope it doesn't mean the same here.

AngerDanger
Finally, I can learn all the gestures and nuanced body movements of Jony Ive during a product video.
Rating: 11 Votes


Im not sure what the issue is.
Rating: 9 Votes

This is a rare case of Apple getting MS's sloppy seconds. Microsoft doesn't even use PrimeSense tech anymore in Kinect v2. They have some in-house "time of flight" technology that transcends what PrimeSense has done. We'll see if this is valuable at all to Apple.


It's still easier than developing from scratch.
Rating: 8 Votes

Porco
I really hate voice and motion controls. Buttons are silent and elegant solutions to most problems if implemented thoughtfully. Please World, don't chuck out the wheel until you've invented hover-boards.
Rating: 7 Votes

No, the biggest problem with Kinect is Microsoft kept pushing this technology as a huge revolution when it was just a REALLY under-cooked add-on feature to a game console that didn't need it.

I'm glad Apple bought these people. Hopefully Apple can find a good use for this tech, unlike Microsoft who wasted it and crammed it down the throats of us gamers for WAY too long.


Ummm, I don't know about that. The X Box One has only been out for a few days.
This new iteration is capable of using hand gestures to control volume, change channels, pause, play, snap windows etc....

Microsoft really gets a lot of negative comments here on this site for no reason.

I like Microsoft and Apple. They are both amazing companies.

Seems like some of you just jet a huge boner when you bash Microsoft and that's just stupid
Rating: 5 Votes

Yea, i dont want a company watching what goes on in my living room...

It may be "off", but its probably doing something...

I know there is little privacy in the modern connected world, but I stop at having devices that can visually monitor whats going on...

I'm ok with using a standard remote for changing channels on a TV, i don't need to look like i'm swatting a fly.


If Apple did this and anyone figured it out (which would be really easy to figure out, the bandwidth use alone would be a dead giveaway), you have no idea how many lawsuits would happen because of it. Not only is this very very illegal pretty much anywhere, but it would be catastrophic to business. Considering that that have almost nothing to gain but everything to lose, I highly doubt they would ever even consider this being a thing.
Rating: 3 Votes

Microsoft initially introduced their new Xbox One game console more as a multipurpose media center and entertainment hub which also happens to play great games than the other way around. Think about why they did that, and then consider that Apple has now acquired the key inventors behind the original Xbox's Kinect 1.0 tech... even though Apple has never shown any interest in launching a game console of its own.

Ever since Steve's intro of the original iPhone, Apple has consistently displayed a pattern of entering a recently emerged product category a bit on the late side, to then soon taking and utterly leading the field. Thanks to a superior design of both the product as well as, especially, the user experience, Apple usually maintains a comfortable lead on its closest competitors for multiple years. It is successful  with remarkable consistency  at (re-)defining whatever new as well as existing product category it trains its sights on.

Now consider, against this background, Apple's brand new acquisition of PrimeSense. What if the overarching Apple strategy this acquisition fits in is one where Apple tries an end-run on not 1 but 5 product categories in one fell swoop: TV-sets, game consoles, TV content distribution (i.e. cable contracts etc.), all-in-one desktop PCs and internet-enabled home-automation systems?

Imagine a sleek new Apple device. It could be called iHub or such, which  like the iPod and iPad before  would be Applespeak shorthand for 'entertainment hub', 'media center', 'media console', or so.

Being an Apple device it of course looks like it has been carved in one cut out of a big slab of pure unobtainium. It resembles their 27-inch iMac a lot, but it is thinner, weighs a bit less and comes in a 35 inch version "for bedrooms" (and home offices) and a 55 inch version "for living rooms" (and boardrooms).

Integrated behind the smooth glass of the top bezel, instead of an integrated webcam, is PrimeSense's sensor array... which you will want to use to operate your iHub by voice  Siri, of course  and gestures... much like people now do through the Kinect 2 on the Xbox One, but without an ugly accessory sticking out of and defacing the top of your sleek TV set and without adding any unsightly dangly wires behind your set too.

Similar to the iPhone 5s' Touch ID, your iHub will come with 'Face ID', which will use facial recognition for security (to unlock access) as well as personalization (personal pre-sets, log-in passwords, etc.) of your  and your family's  usage of your iHub. Yes, the Kinect 2 enables this kind of stuff in living rooms right now with the Xbox One.

Inside the set, aside from the PrimeSense hardware and fairly decent stereo speakers, you will get both an Apple TV and a nearly fully fledged iMac PC... or  more likely  an iMac which runs an Apple TV in software. Optional Apple accessories will include a sleek set of wireless add-on speakers + subwoofer for those craving greater audio immersion in their movies and games.

To further differentiate itself from few-trick-ponies like game consoles and TV sets, it will also come with a host of additional built-in sensors including for temperature, air pressure, smoke & gasses, humidity, light levels etc. ... so as to also function as your home automation center for temperature (think NEST thermostat functions), lighting, safety (fire & gasses detection), front-door security camera, baby-monitoring, granny-monitoring, weather station, energy-consumption tracking, internet usage management, posessions tracking etc. etc. And of course you will be able to access all of that functionality (including the DVR functions, if needed) remotely via your connected iPhone and/or iPad when you are away from home. In other words, your iHub will also become the hub for your family's 'Internet-of-things'.

Given that it is a 1.0 device, Apple will, as is its wont in any case, gimp us all a bit yet again and hold back on using truly top-spec components for all features. So the resolution will probably just be regular HD, and the PrimeSense sensor will be roughly equivalent to today's Kinect 2.0. This way, Apple can later introduce a 'Retina Display' iHub  which will in fact be a by then regular 4K or UltraHD display  and a next-gen PrimeSense sensor array as the 'big new special things' on a future version of the iHub. Per this same rationale, iHub 1.0 will not have a touch-screen and will not be capable of showing content in 3D. Gotta keep some goodies back to make them buy that next version next year!

Net result: we will all be drooling for Apple's new must-have iHub thing: a single, elegant multifunction entertainment hub / media center device that you will use as a TV set, a DVR, a game console, a large-screen PC, and more. And you can use one or more of your iOS devices as second screens, remote controls and (even Wii-like) game controllers.

Why? Why not!? This makes far more sense than speculating that Apple bought PrimeSense to only break into the game console business with a narrowly focused game console pure-play.
Rating: 2 Votes

Ummm, I don't know about that. The X Box One has only been out for a few days.
This new iteration is capable of using hand gestures to control volume, change channels, pause, play, snap windows etc....

Microsoft really gets a lot of negative comments here on this site for no reason.

I like Microsoft and Apple. They are both amazing companies.


And it's still half-baked. Look, Microsoft is a solid company. But let's not overstate the value of the Xbox One hand gesture/voice control utility. 90% of people would still much rather use a conventional remote than the voice controls.

One is both quicker and doesn't interrupt any social interaction going on in the room. The other requires you to shout at a box. You do the math.

"sure when the base OS is FreeBSD"

FreeBSD is the kernel, not the OS. NeXT OS is the kernel + all the layers and intellectual property that went to designing and creating the OS. So for $400 million Apple got NeXT OS + Steve Jobs + the team that Jobs put together to create NeXT, who are wicked smart.

So in that respect, it was a steal, not due to the fact that the underlying kernel is open source & free.

HiRez
$360M is hardly anything to Apple nowadays, but boy did Apple get a steal with the $400M acquisition of NeXT (which included a little bonus of a guy named Steve Jobs).
Rating: 2 Votes