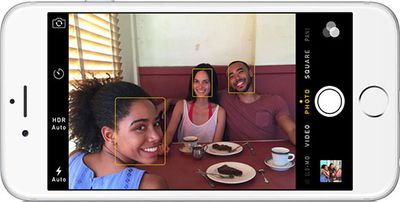 The scanner is said to add $10 to $15 per module to the iPhone 8's bill of materials, which coupled with the OLED display, glass casing, and other increased production costs, could make its retail price up to $100 more expensive than it would be without those features, if Apple looks to maintain a similar profit margin.

The increased costs are in line with a recent report claiming the iPhone 8 could cost upwards of $1,000 in the United States.

The research note said the 3D laser scanner could eventually be used for other purposes, such as augmented reality, but likely not until 2018 at the earliest.

One obvious and potentially most compelling use would be AR/VR experiences in which the user’s hands and other real world objects are being scanned and integrated into a field of view provided by the iPhone mounted into a Google Daydream-like headset. This would open up many interesting entertainment and gaming experiences not available today and might give Apple something extra in an AR/VR accessory compared to Google and others.

He also believes that Apple is likely to eventually open up a 3D scanning API to developers, who could use it to do "everything from determining your shoe size for online orders to helping make sure you are properly fitted on your bike."

Hall expects a strong iPhone 8 replacement cycle later this year, and he said an announcement about the product is possible as early as WWDC 2017, which kicks off June 5. Apple has not made any iPhone hardware announcements at WWDC since 2010, so treat this claim with a proverbial grain of salt for now.

Other rumors have suggested that Apple will embed Touch ID underneath the display as technologically possible.

yaxomoxay
replacing touchID? No. In addition? Maybe.
(possibly a stupid question: how would it work in extremely low light conditions/darkness ?)
Score: 40 Votes (Like | Disagree)

Andres Cantu
Touch-ID is too convenient to go away. If anything, facial recognition should complement it, not replace it.
Score: 35 Votes (Like | Disagree)

clukas
First they get my fingerprint, then they get my a 3D image of my face, next they get my DNA and can start cloning me. All for extra security... oh and little clones of me can buy more iPhones :).
Score: 31 Votes (Like | Disagree)

coolbreeze
Scanner in my 950XL, had in my Note 7. It's aggravating to use. Fingerprint is loads faster and easier. Y'all will see.

Yes I know "Apple will do it better" but the concept itself is pretty janky IMO.
Score: 25 Votes (Like | Disagree)

Saturday May 21, 2022 9:00 am PDT by Hartley Charlton
With around four months to go before Apple is expected to unveil the iPhone 14 lineup, the overwhelming majority of rumors related to the new devices so far have focused on the iPhone 14 Pro, rather than the standard iPhone 14 – leading to questions about how different the iPhone 14 will actually be from its predecessor, the iPhone 13. The iPhone 14 Pro and iPhone 14 Pro Max are expected...
Read Full Article • 216 comments