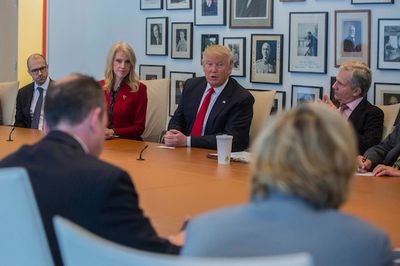 Donald Trump at The New York Times offices in Manhattan
Trump told Cook it will be a "real achievement" for him when he gets Apple to make its products in the United States, as opposed to countries like China and Vietnam where many of its current manufacturing partners operate.

Cook acknowledged the proposition by nondescriptly saying "I understand that," according to Trump.

Trump said he is confident Apple will turn to U.S. manufacturing based on the incentives he plans to offer the iPhone maker, including a "very large tax cut" and "substantial regulation cuts" for corporations.

I said: ‘I think we’ll create the incentives for you, and I think you’re going to do it. We’re going for a very large tax cut for corporations, which you’ll be happy about.’ But we’re going for big tax cuts, we have to get rid of regulations, regulations are making it impossible. Whether you’re liberal or conservative, I mean I could sit down and show you regulations that anybody would agree are ridiculous. It’s gotten to be a free-for-all. And companies can’t, they can’t even start up, they can’t expand, they’re choking.

A recent report said Apple asked its Taiwanese manufacturing partner Foxconn to study the possibility of moving iPhone production to the United States, although Foxconn chairman Terry Gou is said to be less enthusiastic about the idea due to inevitably higher production costs compared to China.

While campaigning at Liberty University in Virginia earlier this year, Trump said "we're going to get Apple to start building their damn computers and things in this country instead of in other countries," while he has also threatened to introduce a 45% tax on products imported from China.

Cook previously said Apple manufactures iPhones in China because the country has put an "enormous focus on manufacturing," while noting the U.S. workforce has a smaller number of individuals with the "vocational kind of skills" needed.

Apple also benefits from lower wages in China, where many of its suppliers are located within close proximity of each other. In Asia, Taiwan's TSMC makes A-series chips for iPhones, Japan's Sharp and Japan Display supply iPhone displays, and South Korea's SK Hynix and Japan's Toshiba produce memory chips for the device.

Apple does have a Mac Pro manufacturing facility in Austin, Texas, operated by Flextronics, but it is a limited effort given the relatively low production volume of its high-end desktop computer.

Cook was personally a Hillary Clinton supporter, hosting a fundraiser for the Democratic presidential nominee in August on behalf of himself. In a company-wide memo issued following Trump's victory, Cook urged Apple employees to "move forward together" despite "uncertainties ahead."

Apple as a company showed support for both the Democratic and Republican parties during their respective campaigns, but it reportedly withheld support for the 2016 Republican National Convention due to Trump's controversial comments about minorities, women, and immigrants, among other subjects.

luckydcxx
As much as some people hate Trump there is no way you can say this is a bad thing to bring jobs and manufacturing back to the US.
Score: 127 Votes (Like | Disagree)

Nimrad
So, future iPhone will now be made in the US by robots made in Asia?
Score: 119 Votes (Like | Disagree) 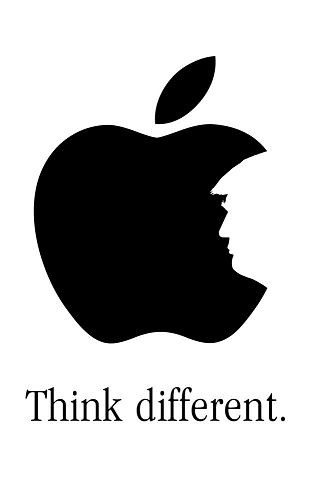 It's a step in the right direction.
Score: 96 Votes (Like | Disagree)

BootsWalking
The American taxpayer shouldn't be asked to subsidize the domestic production of a $600B corporation. Those tax incentives would be put to better use helping small businesses instead.
Score: 83 Votes (Like | Disagree)

As much as some people hate Trump there is no way you can say this is a bad thing to bring jobs and manufacturing back to the US.

It is if it leads to hyper inflation and no real growth in total production.
Score: 71 Votes (Like | Disagree)

5aga
Manufacturing will be mostly done by robots within 5 years anyways.
Score: 61 Votes (Like | Disagree)
Read All Comments