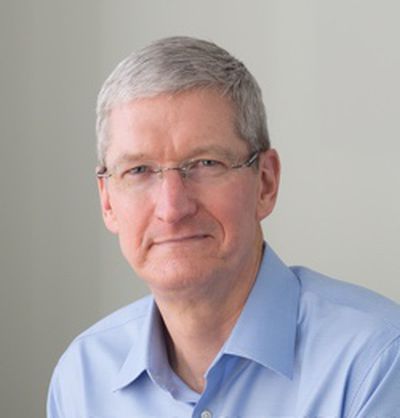 Apple CEO Tim Cook sent out a memo to all U.S. Apple employees on Wednesday reassuring them that the company would "move forward together" following Donald Trump's surprise election win this week.

In the memo, obtained by BuzzFeed, Cook did not name Trump, but pushed back against some of his more divisive rhetoric uttered during the campaign by re-affirming Apple's commitment to diversity.

I've heard from many of you today about the presidential election. In a political contest where the candidates were so different and each received a similar number of popular votes, it's inevitable that the aftermath leaves many of you with strong feelings.

We have a very diverse team of employees, including supporters of each of the candidates. Regardless of which candidate each of us supported as individuals, the only way to move forward is to move forward together. I recall something Dr. Martin Luther King, Jr. said 50 years ago: "If you can't fly, then run. If you can't run, then walk. If you can't walk, then crawl, but whatever you do you have to keep moving forward." This advice is timeless, and a reminder that we only do great work and improve the world by moving forward.

While there is discussion today about uncertainties ahead, you can be confident that Apple's North Star hasn't changed. Our products connect people everywhere, and they provide the tools for our customers to do great things to improve their lives and the world at large. Our company is open to all, and we celebrate the diversity of our team here in the United States and around the world — regardless of what they look like, where they come from, how they worship or who they love.

I've always looked at Apple as one big family and I encourage you to reach out to your co-workers if they are feeling anxious.

Trump singled out Apple for criticism more than once during the bitterly fought election campaign, and at one point called for a boycott of the company's products if it didn't comply with the FBI's request to build a back door into its iPhone software so that authorities could unlock a phone used by San Bernardino shooter Syed Farook.

On another occasion, Trump promised to make Apple build its "damn computers and things in this country instead of in other countries", without explaining how he would go about it.

Apple withdrew its support of the Republican National Convention because of Trump's controversial remarks, particularly regarding minorities, women, and immigrants, and Cook held a separate fundraising event for Speaker of the House Paul Ryan and other Republicans instead.

Back in March, Tim Cook and other tech leaders attended the American Enterprise Institute's annual World Forum along with top Republican officials partly to discuss concerns regarding Trump's political emergence and candidacy.

Negritude
This is an example of the kind of empty neoliberal rhetoric that led to Trump getting elected.

A company that touts diversity, yet from an economic standpoint, shuts so many people out.

Dr. King was about racial AND economic justice, a Civil Rights Movement AND a Poor People's Campaign, but Tim Cook and his mealy-mouthed subordinates wouldn't understand that.
Score: 171 Votes (Like | Disagree)

DrewDaHilp1
How'd that fundraiser work out Tim? Did it go the way you thought it would? No? Perhaps you should lead Apple, stay out of politics unless it's regarding the governments over reaching attempts to weaken iOS security. If you haven't noticed Tim you recently just got out Appled by Microsoft.
Score: 116 Votes (Like | Disagree)

bob24
As an outsider (not a US citizen or resident) I find it either comical or worrying that he feels like there is a need to do that.

There was an election and a candidate has been selected. Some people are happy about it, other aren't (welcome to democracy, the first group needs to know it doesn't mean everyone things like them, and the second one needs to accept their ideology is not the winning one this time).

If people on both sides can't ignore politics in the workplace there is a serious lack of maturity and professional skills on their part. And if they are already ignoring it, what does a CEO need to send this kind of message to his employees?
Score: 102 Votes (Like | Disagree)

To my friends and family, some who voted for someone that didn't win, here's my advice:

Exact your reaction to the election by living your life to the be the best person you can be. It isn't some person in the White House's job to make your life better. That's your job.

Study, learn, grow. Become the person you always wanted to be, and realize that action relies on you, not the President.

Two days ago, it was a choice between Bad and Worse, but today it is a choice between good and great. What it takes to be great is just 2% more effort and a good attitude. Make the choice to be happy, whether your candidate won or lost.

Just in case you're wondering, my candidate lost 6 months ago.
Score: 97 Votes (Like | Disagree)

This is an example of the kind of empty neoliberal rhetoric that led to Trump getting elected.

A company that touts diversity, yet from an economic standpoint, shuts so many people out.

Want to increase your election prospects in the US? Talk about dating your daughter and deny global warming, apparently. Or why not gleefully celebrate torture or call anyone different a rapist. Land of the free and the home of the misogynist.
Score: 81 Votes (Like | Disagree)

the8thark
Garbage like what TC just said is part of the reason why Trump got elected. The pubic are sick of the rich elite running the show without putting the neds of everyone first.

TC needs to either play politics or be CEO of Apple. Not both. TC trying to do both as well as support Clinton was not going to help Apple at all.
Score: 51 Votes (Like | Disagree)
Read All Comments