According to Apple, #PokemonGo has set an @AppStore record with more downloads in its first week than any other app in the Store’s history. — Rene Ritchie (@reneritchie) July 22, 2016

Pokémon Go was first released in Australia, New Zealand, and the United States on July 5, rolling out to other countries over the course of the next two weeks. Pokémon Go is now available in 30 countries around the world. 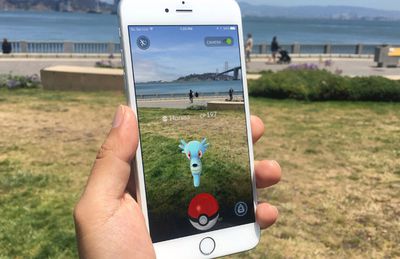 Despite server issues and in-game bugs that have yet to be resolved, Pokémon Go has become a smash hit, luring players outside to explore their neighborhoods in search of Pokémon. Last week, Pokémon Go had earned an estimated 7.5 million downloads in the United States alone, hauling in more than $1.6 million each day, and at two weeks, that number had grown to 21 million daily active users.

On the instant success of Pokémon Go, Nintendo shares jumped more than 25 percent, and businesses and restaurants near PokéStops, where players can collect items and find Pokémon, have reported significant increases in foot traffic.

In Japan, Pokémon Go today launched with a McDonald's sponsorship deal, hinting at future methods Niantic will use to monetize the game. In Japan, McDonald's locations are marked as "Gyms" where players can battle each other for control of the spot to earn daily prizes and experience.

Over the course of the next year, Apple could make upwards of $3 billion in revenue from Pokémon Go, as it receives a 30 percent cut of all in-app purchases.

I am loving PoGo. I love hearing about all the stories of where it has helped people with mental health issues. It can be a positive tool. It can be a negative tool. Depends on how you decide to use it.

My mother died earlier this month and Pokémon Go has been an amazing distraction for me and a way to get myself out of the house in the evenings. Staying busy and distracted is the only thing that keeps me from collapsing, so I am thankful that it came out when it did.
Score: 45 Votes (Like | Disagree)

Carnifexia
You aren't familiar with the dev process at scale are you?

aberrero
So you can go to McDonalds and say you "went to the gym"?

Carnifexia
I am loving PoGo. I love hearing about all the stories of where it has helped people with mental health issues. It can be a positive tool. It can be a negative tool. Depends on how you decide to use it.
Score: 17 Votes (Like | Disagree)

My mother died earlier this month and Pokémon Go has been an amazing distraction for me and a way to get myself out of the house in the evenings. Staying busy and distracted is the only thing that keeps me from collapsing, so I am thankful that it came out when it did.

My sincere condolences. It's refreshing to hear this game helps a lot of people so positively too. Best wishes, Jclo. :)
Score: 15 Votes (Like | Disagree)
Read All Comments