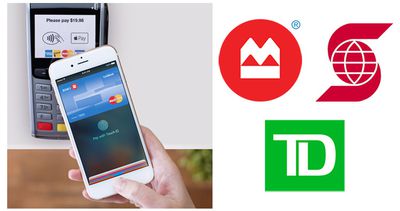 Apple Pay currently works with MasterCard and Interac at BMO, Visa and Interac at TD Canada Trust, and Visa, American Express, and Interac at Scotiabank. Eligible cards can be scanned or added manually to Apple Pay by tapping the "Add Credit or Debit Card" option in the Wallet app on iOS 8.1 or later.

All three banks are now listed as participating issuers on the Apple Pay website in Canada. Meanwhile, ATB Financial and Canadian Tire Bank have added support for in-app purchases with Apple Pay on compatible iPhone and iPad models, expanding upon their existing support for in-store payments.

Scotiabank direct banking subsidiary Tangerine will also support Apple Pay in the near future, according to its Twitter account.

The next largest Canadian banks and credit unions that would be suitable Apple Pay candidates in the future include Desjardins and National Bank of Canada, the two largest financial institutions in Québec, along with Vancity and Meridian. None have been listed as "coming soon" on the Apple Canada website.

Apple Pay is compatible with iPhone 6s, iPhone 6s Plus, iPhone 6, iPhone 6 Plus, and iPhone SE, in addition to the Apple Watch when paired with an iPhone 5 or later, for in-store payments, while the iPad Pro, iPad Air 2, iPad mini 4, and iPad mini 3 support Apple Pay for in-app purchases only.

Apple Pay has been available for non-bank-issued American Express cardholders in Canada since last November.

Apple Pay launched in the U.S. in October 2014 and expanded to the U.K. in July 2015. The service is also available in Australia, China, and Singapore. Apple is "working rapidly" to expand Apple Pay to additional regions, including Hong Kong and Spain and possibly France, Brazil, Japan, and elsewhere in Asia and Europe.

Canadian here too. Really do care. I just came back from California and even though I did have Apple Pay on my RBC mastercard I've never used it there as very few places had NFC terminals and some of those that did have them didn't have them enabled. Back in Canada is a totally different story. Apple Pay works everywhere and is really nice.
Score: 7 Votes (Like | Disagree)

ApplePay is nice - so good to see the rollout at other Canadian banks.I'd take the Canadian banking infrastructure over what exists in the states - US banks are really dragging their feet ( lagging on chip and pin, NFC payments etc )....

You're right about that, speaking as someone down in the lower 50. Here in the states, the U.S. banks get $0.07 more per signature transaction than for a PIN verified transaction - that's why Chip and PIN didn't happen in the U.S. (despite the better security of PIN). Looking at that, I doubt the U.S. will ever get Chip & PIN as a mainstream requirement.
Score: 4 Votes (Like | Disagree)

Scott66
About freaking time the Canadian Banks arrived to the future. Apple Pay's security and privacy features that come with the anonymous token method are invaluable to the banks customers. The banks dragging their feet just showed how important customer needs when are compared to the expected lost fee revenue.
Score: 3 Votes (Like | Disagree)
Read All Comments