At today's media event that saw the debut of new iPads and a new Retina iMac, Apple announced that its Apple Pay mobile payments solution will launch on Monday, October 20 alongside iOS 8.1, which will enable the service. According to Apple, more than 500 additional banks have signed on to support Apple Pay, as have dozens of additional retailers. 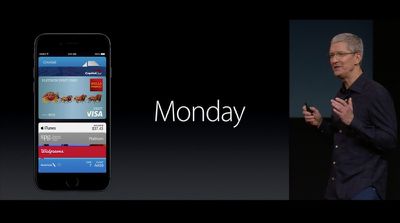 In store payments with Apple Pay will require the iPhone 6 or iPhone 6 Plus, as they both include NFC chips, and the Apple Watch will also be able to be used to make in-store payments when it launches.

The iPhone 6, the iPhone 6 Plus, the iPhone 5s, and the newly released iPad Air 2 and iPad mini 3 can make online purchases with Apple Pay in apps that support it.

"Our team has worked incredibly hard to make Apple Pay private and secure, with the simplicity of a single touch of your finger," said Eddy Cue, Apple's senior vice president of Internet Software and Services. "The reaction to Apple Pay has been amazing. We continue to add more Apple Pay ready banks, credit card companies and merchants, and think our users will love paying with Apple Pay."

Apple places a heavy emphasis on security with Apple Pay, and the company's Apple Pay press release once again points out that Apple Pay does not store actual card numbers, replacing them instead with a Device Account Number in the Secure Element, pairing them with a one-time use code that verifies each payment along with Touch ID.

Apple Pay protects personal information by preventing stores from seeing a user's credit card number, name, and more. It also does not collect transaction information, keeping transactions between the user, the merchant, and the user's bank.

Credit cards and debit cards from the three major payment networks, American Express, MasterCard, and Visa, are supported by Apple Pay, and several banks, including Wells Fargo, Bank of America, Capital One, and more have signed up to partner with Apple on the payments initiative.

Apple Pay will be available in the United States beginning on Monday, October 20, following the release of iOS 8.1. Apple suggests that prospective Apple Pay users contact their banks to determine their card's Apple Pay eligibility, as some banks may not support all card types.


Apple was smart and went with the evolution of an evolving and decided industry initiative (one use codes per transaction) that VISA and AMEX (IIRC) both agreed on last year.

Google tried to make credit cards as they knew them 'cool' and 'high tech' rather than tackling the existing problematic dynamic WITH the credit card companies.

I can't wait to pay for a gatorade at the gas station mid-way through my run with just my phone.
Score: 6 Votes (Like | Disagree)

But some members don't trust Apple Pay yet.


It's beyond secure and more secure then Google Wallet, much more secure then Google Wallet, Apple Pay is so secure that banks are actually willing to accept any liability charges from Apple Pay, if anything ever happened, thats how much trust all these banks and retailers have in the system, it's a very well secured system that is essentially unhackable with its local-based tokenization as opposed to cloud-based tokenization on Google Wallet
Score: 5 Votes (Like | Disagree)

bpeeps
But some members don't trust Apple Pay yet.
Score: 4 Votes (Like | Disagree)

chirop
Instead of being honest Apple decides to bring 8.1 as the next big thing yet the adoption rate is lower then that of ios 7 and there are tons of people pissend off how buggy it is.
Score: 3 Votes (Like | Disagree)

huschpuscheli
so this keynote is a comedy show or what? i like it!
Score: 3 Votes (Like | Disagree)