Apple has been named the world's most valuable brand in 2016, according to the latest Forbes rankings, despite posting its first negative-growth quarter since 2003 with declining sales across its iPhone, iPad, and Mac product lines. 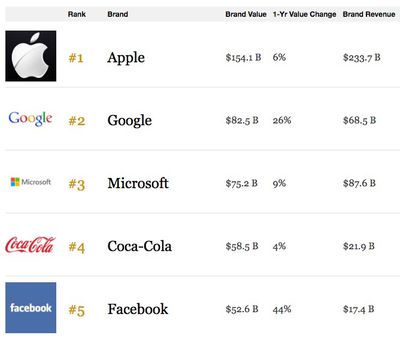 Apple's recent slowdown was not enough to prevent the company from securing the number one position in the list for the sixth consecutive year, ahead of rivals Google and Microsoft. Forbes placed Apple's brand value at $154.1 billion, up 6-percent from 2015 and nearly double Google's value of $82.5 billion.

Dydegu
Gotta hand it to Coke for holding its own amid all of the tech giants.
Score: 6 Votes (Like | Disagree)

SMIDG3T
Half of Coca-Cola's revenue is from me. I drink way too much!!
Score: 4 Votes (Like | Disagree)

jayducharme
If that report is accurate, that's incredible. Apple has nearly double the worth of its nearest competitor. So much for the "Apple is doomed" rumors, even in a downturn.
Score: 3 Votes (Like | Disagree)

dannys1
What? But they haven't released a Macbook Pro every 27 minutes and they haven't even designed an iPad that can fly yet. Seriously over priced junk that isn't anywhere innovative enough for my Back to the Future mind! I should have a hoverboard Macbook by now with DDR4 ram, the DDR4 ram will obviously make the biggest difference to my life...
Score: 3 Votes (Like | Disagree)

Apple is taking a piss on its customers.
No one is asking for an iPad that can fly, but if you wanna get technical, offering a spinner (as opposed to an SSD) in a $1.200 computer is pretty insulting.

Offering. Not jamming it down your throat. If you choose to buy an iMac with a spinning disc, that's on you. It may be slower but it has higher capacity too.

Gotta hand it to Coke for holding its own amid all of the tech giants.

Got to hand it to them for helping in creating world wide obesity too.
[doublepost=1463059561][/doublepost]

Now is a time for Apple to buy Microsoft

If they close it and give the share holders their money back ... maybe ;)
Score: 2 Votes (Like | Disagree)
Read All Comments