According to Apple CEO Tim Cook, Apple Music now has 13 million paying subscribers, up from 11 million users just two months ago. In a February interview, Eddy Cue and Craig Federighi said Apple Music had 11 million subscribers, suggesting impressive growth over the past 10 weeks.

Apple Music launched in more than 100 countries on June 30, 2015 and will see its first anniversary in two months. At its current growth rate, Apple Music is on track to have somewhere around 15 million subscribers, gaining significant ground on Spotify, which reported more than 20 million paying subscribers and 75 million active users in the weeks ahead of Apple Music's debut. 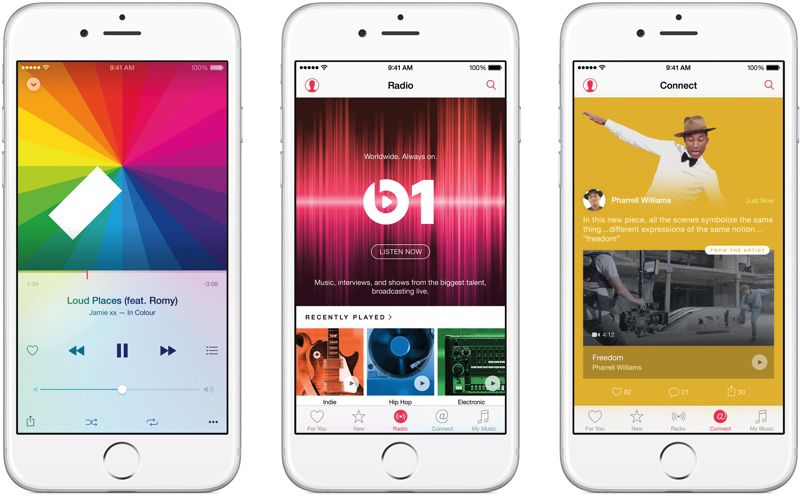 Since its launch, Apple has heavily promoted Apple Music with exclusive releases and videos from artists like Taylor Swift and Drake and dynamic content on its free Beats 1 radio service. Apple plans to continue on with its Apple Music advertising and in the future, will debut a television show starring Dr. Dre.

Apple Music is priced at $9.99 per month for individual users and $14.99 per month for a family of up to six users, which can be paid for using an iTunes account. Apple has seen success with Apple Music in part due to the large number of credit cards already attached to iTunes accounts, making it easy for customers to subscribe to Apple services and purchase Apple content.

Apple Music is a waste of time that should never have happened. People will not pay to rent music.


13 million people, including myself, disagree with you.
Rating: 26 Votes

13 million is tiny, considering the 1 billion plus user base that Apple has.

Apple Music is a waste of time that should never have happened. People will not pay to rent music.

I'll go ahead and disagree based on the fact that I am a person, and I'm also an Apple Music subscriber. So there's at least one.

I love the service, the catalog is huge and it's everywhere I want my music. I love that every time somebody suggests a song or album to me I can just hop on there, give it a listen, and if I like it I add it. It's also increased my music discovery a ton. I listened to the Hamilton soundtrack the other day (which is fantastic, if anyone is still wondering), added it to my music, and promptly fell down a rabbit hole of musicals I either never bothered listening to or never heard of in the first place. It's everything I wanted it to be, and it's worth every penny.
Rating: 17 Votes

69650
It's still the worst user experience of all the streaming services I've tried.
Rating: 7 Votes

hemanwomanhater
Seriously impressive numbers given how long it's been around.

Side note: I don't know when it was added but I love having the ability to listen to the past Beats 1 shows. That was a sorely missed feature for a while.
Rating: 6 Votes

JoEw
Views From the 6 exclusive will add another 2 million easily.
Rating: 5 Votes

Carlanga
Isn't that about 13/1000 million iOS devices? For something that is pushed in what used to be one of the most used apps that came w an iPhone those numbers are very low. They took away free radio and other stuff for us and I have had to put the dumb music app in the random crap from Apple I can't delete.
Rating: 4 Votes

Mac Fly (film)
I was a Siri Apple Music user and enjoyed the service because of this. Didn't see the UI much, just said Siri play ____. Needed no other features. One area I'd like Apple to invest is a clever engine for deciding what to play when someone asks for music based on adjectives such as "fun" or "cool" or "happy" or "hippy" or anything else etc. A human would come up with something for those requests where Siri would be puzzled.
Rating: 3 Votes

People on free trials... That extend from last summer until now? Didn't Apple Music launch about 8 or 9 months ago?

How many iPhone users are on Verizon? how many on T Mobile. How many on Vodafone in the UK?

My point being people have choices so achieving full market penetration is difficult. The EU comes down hard on that sort of thing so Apple can't do much more.

It's a big pie to have a slice of. That's the important thing.

I wouldn't have minded if they didn't start removing features that were free for all and hadn't made the app more cumbersome to use for your Personal music as well.
Rating: 2 Votes

Spotify's 20+ million users don't agree, either.
Or the countless businessmen getting rich off it.

Actually they announced it's at 30 million now... Apple Music as competition doesn't seem to be affecting them at all.
[doublepost=1461740303][/doublepost]

Am I the only person who thinks that iTunes Match is the best invention ever?

It was good until they integrated Apple Music, now the whole app is a piece of crap. User interface is horrible and cumbersome and not as user friendly as Spotify.
For a company who made user friendly a standard, I think I know where the original MobileMe team ended up.
Rating: 2 Votes

trifid
I wonder how many of that 13 million are grandpa/grandmas that forgot or don't know how to turn off the subscription at the end of the trial :D
Rating: 1 Votes
[ Read All Comments ]