Apple Music today announced that it'll stream a concert for the band The 1975 Thursday at 9 a.m. Pacific on Beats 1. Apple Music has been teasing the announcement all day on its Snapchat account, displaying the band's lyrics and teasing the concert's set as preparations for the event are completed.

Apple isn't a newcomer to live streaming concerts, as it broadcasts its annual Apple Music Festival to music fans around the world for free. It is, however, the first time the company has streamed a concert live on its new streaming service. 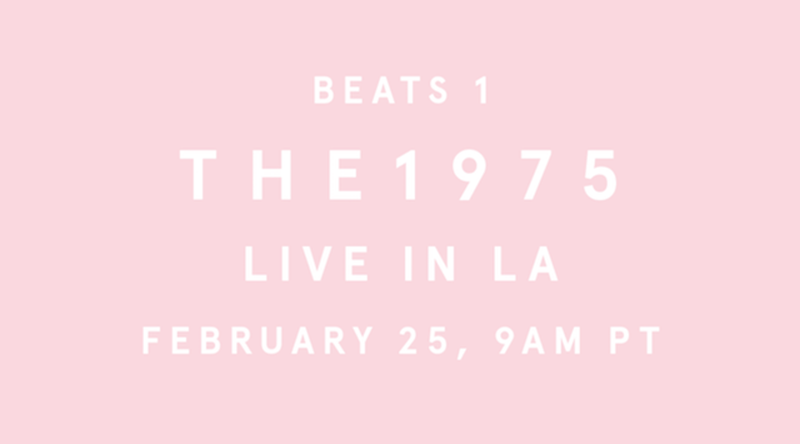 The concert will be streamed from a rooftop in Los Angeles, with The 1975 playing songs from its new album "I Like It When You Sleep, for You Are So Beautiful Yet So Unaware Of It," which releases on February 26. However, it's unclear whether the concert will be an audio stream on Zane Lowe's Beats 1 radio show or whether it'll be a video stream. On The 1975's Connect page, the band only promises that fans will "hear" the songs performed live on Beats 1.

Since the launch of Apple Music, the Cupertino company has worked to secure exclusive content for the service to differentiate it from competitors. In December, singer Taylor Swift announced that Apple Music would be the exclusive home to her concert film "The 1989 World Tour LIVE." More recently, it was reported that Dr. Dre would star in Apple's first original television series, Vital Signs, which is being described as a dark semi-autobiographical drama about the Apple executive and Beats co-founder. The series is rumored to be distributed via Apple Music.

I have no idea why. They're awful and their Twitter feud with Reverend & The Makers is lame.


Actually, they're quite good.
Rating: 2 Votes

Mackinjosh
An awful band paired with an awful music service. A match made in heaven.
Rating: 1 Votes

Slix
Cool! I kinda like these guys, so I'll try to tune in and listen to them perform for a bit. :)
Rating: 1 Votes


I have no idea why. They're awful and their Twitter feud with Reverend & The Makers is lame.
Rating: 1 Votes

advancewarsbest
Anyone know which rooftop, i'd like to view from a neighboring rooftop
Rating: 1 Votes
[ Read All Comments ]