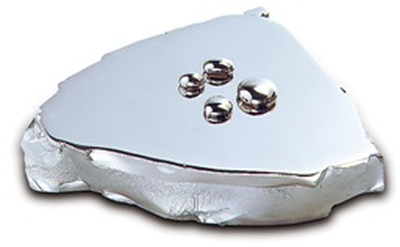 The U.S. Patent and Trademark Office today granted Apple a series of 40 new patents, including one that describes various implementations and benefits of a Liquidmetal home button on iPhones and iPads.

Apple has annually renewed its exclusive rights to use Liquidmetal since 2010, but how it plans to use the alloys remains unclear. Early speculation centered around Apple using Liquidmetal for the iPhone SIM Tool, while other Liquidmetal home button patents have surfaced as early as 2014. Meanwhile, Steve Zadesky, named on this and other Liquidmetal patents, recently announced he was leaving Apple.

Today's patent explains how Liquidmetal's high elasticity makes it an ideal material for a pressure-sensitive home button that would deform slightly when pressed, but return to its normal shape when you remove your finger or thumb. Liquidmetal would always retain this elasticity, while other materials like titanium or stainless steel could become irreversibly deformed and adversely affect the home button.

A second embodiment of the patent details a home button with a switch comprising a small actuator positioned adjacent to Liquidmetal material, whereby pressing the actuator deforms the bulk solidifying amorphous alloy. The efficient design could be easier for Apple to manufacture compared to conventional pressure-sensitive home buttons that use dome switches placed on a substrate with or without an actuation nub.

It does not appear that Apple's upcoming products, including the rumored iPhone SE, iPhone 7, and new 9.7-inch iPad Pro, will adopt Liquidmetal, given the absence of any recent rumors surrounding the alloys, but Apple's continuous renewal of the material implies it remains interested. It is common for Apple to patent inventions that are not publicly released until years later, if ever.

KazKam
Liquidmetal: A solution looking for a problem.
Score: 25 Votes (Like | Disagree)

Ballis
I was hoping they would kill of the homebutton all together. And put the fingerprint sensor beneath the screen.
Score: 9 Votes (Like | Disagree)

Vanilla35
Stop patenting physical home button technology. If you haven't used it already, then you missed the boat. We're all looking forward to Touch ID being imbedded into the screen, and the home button bezel is getting to be ridiculous. Cut the chin apple.
Score: 4 Votes (Like | Disagree)
Read All Comments

Friday June 18, 2021 9:41 am PDT by Sami Fathi
After a long wait, YouTube for iOS is officially gaining picture-in-picture support, allowing all users, non-premium and premium subscribers, to close the YouTube app and continue watching their video in a small pop-up window. In a statement to MacRumors, YouTube says that picture-in-picture is currently rolling out to all premium subscribers on iOS and that a larger rollout to all US iOS...
Read Full Article • 157 comments

Friday June 18, 2021 6:59 am PDT by Sami Fathi
Apple supplier TSMC is preparing to produce 3nm chips in the second half of 2022, and in the coming months, the supplier will begin production of 4nm chips, according to a new report from DigiTimes. Apple had previously booked the initial capacity of TSMC's 4nm chip production for future Macs and more recently ordered TSMC to begin production of the A15 chip for the upcoming iPhone 13,...
Read Full Article • 137 comments