Following reports that Apple will release a new 4-inch iPhone in March or April, a user named Gijs Raggers has shared a photo of the alleged smartphone next to an iPhone 5 on Dutch website One More Thing. The photo was posted on the website's discussion forums, where anyone can sign up and contribute.

The purported 4-inch iPhone appears to be the same size as the iPhone 5, but otherwise looks identical to the iPhone 6 and iPhone 6s externally, including its curved glass edges, thinner bezels, relocated FaceTime camera, pill-shaped volume buttons and power button moved to the right side. 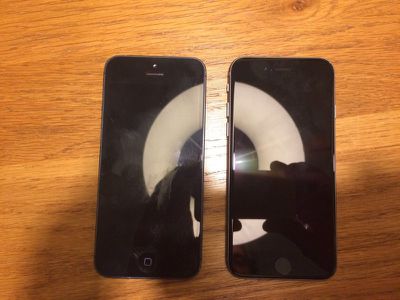 Leaked photo of purportedly new 4-inch iPhone to the right of an iPhone 5
The veracity of the photo cannot be confirmed, but Gijs Raggers previously leaked photos of the original iPad Air in August 2013, nearly three months before the tablet was announced. Many other photos and videos of the tablet surfaced around the same time, however, so take that as you will.

While most rumors suggest the new 4-inch iPhone's upgraded tech specs will be similar to the iPhone 6, including A8 and M8 chips, an 8-megapixel rear-facing camera and NFC for Apple Pay, the photo conflicts with reports claiming the device will look similar to the last-generation iPhone 5s design.

Ideally, what size iPhone screen will your next one be? — MacRumors.com (@MacRumors) January 24, 2016

It also sounds questionable for Apple to call its new 4-inch iPhone the "iPhone 5se" if the device truly resembles an iPhone 6. That may very well be the name, but the oft-rumored "iPhone 6c" name, or even the "iPhone 6 mini" name suggested in our forums, would seem to be more fitting name choices in that scenario.

KGI Securities analyst Ming-Chi Kuo issued a note to investors today, a copy of which was obtained by MacRumors, in which he reaffirmed Apple will release a new 4-inch iPhone and iPad Air 3 in the first half of 2016. Both devices, and new Apple Watch bands, could be introduced at a March media event in San Francisco.

This leak looks like it has a good chance of being for real. Forget it. I'll wait for iPhone 7.
Score: 30 Votes (Like | Disagree)

Andres Cantu
If it's gonna look like a smaller iPhone 6, then the "5se" name just makes no sense whatsoever. Just call it the "iPhone 6 mini" and be done with it. They did it with the iPad, why not with the iPhone?
Score: 21 Votes (Like | Disagree)

rijc99
I was always under the impression it would share the basic dimensions of the 5s but the design language of the 6 series.
Score: 15 Votes (Like | Disagree)

aces99
If Apple wants the new 4" phone to sell well they need it to have the internals of the 6S. If it has the internals of the 6 they are crippling it right out of the gate and it want sell as well. I want a 4" phone myself but I don't want it with old tech. I want it to be the same as the 6S just in a smaller form factor. Guess we will have to wait to see what Apple comes out with.
Score: 14 Votes (Like | Disagree)