Back in April, a pair of photos surfaced showing what was claimed to be a white front panel from Apple's fifth-generation iPad, showing narrower side bezels as had been rumored as part of a redesign inspired by the iPad mini. A brief video that surfaced over this past weekend also appeared to show the next-generation iPad's front panel and digitizer paired with a rear shell. 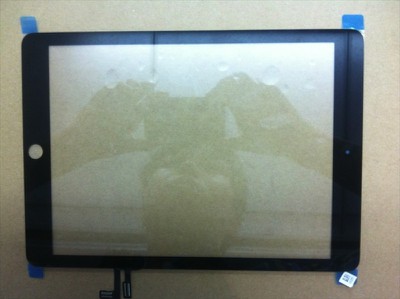 Now, a new listing at parts and repair firm Macfixit Australia includes a number of photos of a similar part, which the company's supplier says is a genuine front panel and digitizer for the fifth-generation iPad.

The part shows the same narrower side bezels seen in previous leaks, as well as a pair of flex cables running along one of the long edges of the panel and ending in connectors in roughly the same location seen on both the current iPad and in the leaked photo from last weekend. The connectors are different from those seen in current and previous full-size iPads, but Apple has been rumored to be making a number of technological changes in order to achieve the smaller form factor expected for the upcoming iPad, revisions which could necessitate a significant change in connector design.

Our supplier claims this is the new iPad 5 Screen/Digitizer:

- The display area is the same as the iPad Retina.

- The edges of the frame are narrower using the same style as the iPad mini.

- The ITO (Indium tin oxide) is the same as the iPad mini.

- There is now 2 connectors instead of 1.

- The connectors have been changed from FFC (Flat Flexible Cable, like the iPad 2/3/4) to FPC (Flexible Printed Circuits, like the iPhone 4/5).

Stamped on the front panel is a part number of 821-1892-02, which matches the format used by Apple on many of its iOS device components.

Apple is expected to introduce the fifth-generation iPad as soon as next month, with an updated iPad mini rumored to be following fairly soon after.

Guy that took the picture may or not be screwed since you can see his reflection.


What he should have done was photoshop Tim Cook in the reflection making it look like Tim took the pic.
Score: 41 Votes (Like | Disagree)

Anyone think there will be a price reduction? All these other tablets are getting ridiculously cheap...

They are cheap for a reason.

You don't see Audi or BMW dropping their prices because other cheap cars come out do you?

They drive and get you from place to place just like Audis and BMW's do. But we all know there is something called the driving experience and the design/make/materials/look of the car.

Now apply that here to tablets.
Score: 19 Votes (Like | Disagree)

komodrone
Guy that took the picture may or not be screwed since you can see his reflection.
Score: 19 Votes (Like | Disagree)

Adokimus
Oh god, I feel awful that you can see his reflection. He's selling these photos to make a little money since he works for pennies, but he is likely only viewing these pics on a mobile and doesn't realize he's sending his reflection. I bet he's going to be in a world of hurt over this.
Score: 7 Votes (Like | Disagree)

My crystal ball tells me that it will feature A7 quad CPU and 2GB of RAM ;)


2 GB of RAM?! Quad CPU?!?! Don't over-do this man! I mean, this is Apple we're talking about... they put in just enough to make it good for use. Not enough to make a good debate over iOS vs. Android.
Score: 5 Votes (Like | Disagree)

rtr1985
This forum should be renamed to "Mac-Automobile Analogies"
Score: 5 Votes (Like | Disagree)
Read All Comments

Friday May 14, 2021 11:52 am PDT by Juli Clover
Following the discontinuation of the iMac Pro, Apple also appears to be discontinuing Space Gray "Magic" accessories that it sold separately alongside the iMac Pro. The iMac Pro was the only Space Gray Mac, and Apple designed special matching accessories for it. The Space Gray Magic Mouse 2, Magic Keyboard, and Magic Trackpad all now say "While supplies last" in small wording at the bottom...
Read Full Article • 292 comments