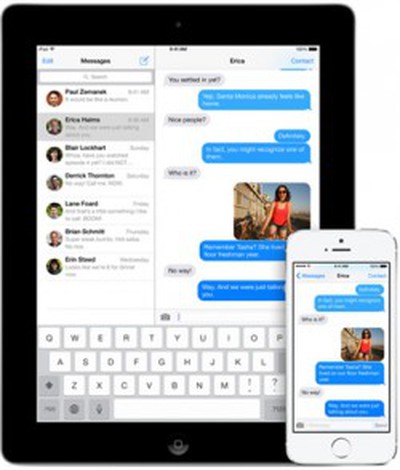 Apple yesterday won a significant ruling against a group lawsuit filed by a former iPhone user who sued the Cupertino company after claiming that switching from an iPhone to an Android smartphone interfered with her receipt of text messages (via Bloomberg).

The plaintiff, Adrienne Moore, noted in her complaint originally filed in May 2014 that an inability to unlink her phone number from iMessage prevented her from receiving text messages sent by iPhone users to her Samsung Galaxy S5 running Android. The lawsuit claimed users switching away from the iPhone to other devices were "penalized and unable to obtain the full benefits of their wireless-service contracts" due to the issue, with Moore and her lawyers alleging Apple failed to successfully elaborate on the "interference" that switching platforms would cause.

The lawsuit sought group status for the claim, which would automatically include all affected users and potentially result in a significant settlement or court judgment, but U.S. District Judge Lucy H. Koh yesterday ruled the suit can't continue as a group lawsuit because it wasn't clear enough that all included members were actually affected by the occurrence described by Moore. Koh decided there was no direct "contractual breach or interference" relating to a problem within the iMessage system itself, thereby giving Apple a victory on the case.

Even if Moore is correct in arguing iMessage has “systematic flaws that could result in the disruption of text messaging services, that determination does not assist the court in determining whether iMessage actually caused the proposed class members to suffer any interference,” Koh wrote in her ruling.

The ruling is a win for Apple because allowing the case to proceed stood to increase the iPhone maker’s potential costs in defending the case, and could have given plaintiffs leverage to negotiate a deal.

The lawsuit began in May of 2014, with customers noting iMessage issues after switching over to a non-Apple platform since the service was introduced in 2011. Despite Apple's move to address the issue by offering a tool for users to deregister their phone numbers from iMessage, it was ruled last November that the company would indeed face a federal lawsuit on the iMessage issue.

MrGimper
Thrown out due to the plaintiff being mentally unstable.

I mean, what sane person gets rid of an iPhone and goes Samsung
Score: 49 Votes (Like | Disagree)

RojoLeo
To those saying it's user error, it's not. Even following these steps, I continue to have issues over a year after switching to an Android. It's completely sporadic, sometimes coming through correctly and sometimes not. I'm unable to receive messages from certain friends who include a specific set of other recipients in a group text, i.e. if they remove one of the other people I'm suddenly able to get the group texts.

I'm an Apple user in many other areas, so save the hate—this is a real issue.

Edit: to be clear, I'm suggesting the issues still needs to be addressed, not that anyone should profit from it.
Score: 23 Votes (Like | Disagree)

FSMBP
I'm an Apple Fanboy, but I think this case is warranted. iMessage is enabled by default on your iPhone (some people don't know what it is, but they are using it). Then, if I get a new non-Apple iPhone, it creates an issue for people trying to send you messages.

I don't get why Apple didn't implement a system where if a users device doesn't ping its iMessage servers every day or so, it would temporary turn off iMessage for that account until it gets back online.
Score: 20 Votes (Like | Disagree)

Plaintiff appears incompetent and somewhat of a crackpot hoping for a payout from deep pockets.

I guess the plaintiff will just have to go out and get a life and a job now. I'm assume she has neither since she had the time to file this lawsuit.

Even if the class-action failed, what's with all the hate directed at a plaintiff that was trying to protect consumers by calling out a PIA caused by a billion-dollar corporation? It's not like this plaintiff was doing something against all of our interests here - we all benefit when people call out corporations on their BS in a court.
Score: 16 Votes (Like | Disagree)

stewy
the typical "apple can do no wrong" attitude shining through again!
Score: 14 Votes (Like | Disagree)
Read All Comments

Friday July 23, 2021 9:37 am PDT by Juli Clover
Apple is developing an external display that includes an A13 chip with Neural Engine, according to a new rumor from 9to5Mac. The A13 chip with Neural Engine would presumably serve as an eGPU, though details are light at this time. Having a CPU/GPU built into the external display could help Macs deliver high-resolution graphics without using all the resources of the computer's internal chip....
Read Full Article • 218 comments