Apple requested 4K video content from Sony Pictures for the purpose of digital distribution and on-demand streaming testing, according to a new document [PDF] released by WikiLeaks from the Sony data breach (via AppleInsider). 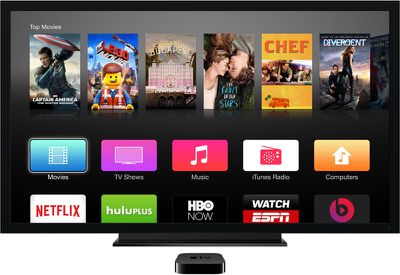 The document is a materials access letter from Culver Digital Distribution Inc, a division of Sony Pictures Entertainment, to Apple. It served as a formal agreement between the two companies for the "testing and / or preparing" of 4K content from Sony movies and TV shows. The letter is dated September 26, 2013, hinting that Apple has been exploring distributing 4K content for the past two years.

The Cupertino company has been rumored to be working 4K in the past, most notably in 2013 when two reports suggested Apple was working on a 4K TV set. Those plans were eventually nixed and reports emerged of a brand new set-top box Apple TV with an A8 chip alongside a TV streaming service. Speculation suggested the new Apple TV's rumored A8 chip, which is capable of playing 4K content, would result in a 4K-capable Apple TV and streaming service. However, a report earlier this year confirmed that a new Apple TV would not support 4K content.

While 4K, also known as Ultra HD, has seen an increased amount of popularity recently with more affordable 4K TV sets from manufacturers and some availability of 4K content on streaming services like Netflix, the format is not yet ubiquitous.

I don't really understand the hype around 4k... The difference in resolution (HD vs 4K) is not noticed from a distance... And streaming will not have full resolution and frame rate anyways!

Very same thing said when :apple:TV was limited to 720p and some of us wanted it to go 1080p. Funny how before Apple embraces something it doesn't make much sense... but after they move, it makes great sense (go back and look at 1080p wish threads when 720p was Apple's max, or bigger screen phone threads, or NFC, or even front-facing "iSight" cameras when iPad 1 was launched, etc).

4K is the next big thing in screens. If it can't make sense to us today, it shouldn't make sense when Apple embraces it either. BUT, like bigger screen phones or 1080p or 5K iMac or NFC or Retina screens on anything or FaceTime cameras on iPads, our collective sentiment will "evolve with the times" as soon as Apple decides to go there.

That said, I'm much encouraged by this rumor. The hardware must lead; it never makes sense for the software to come first. Personally, I don't really care if there is ever 4K content in the iTunes store; 4K playback means sharper pictures on 4K screens, our own 4K content shot on 4K camcorders will play back that much sharper, and so on. Eventually a Studio would be tempted to test 4K movie profitability; it they make a profit, they'll do more. And competition will want to compete.

There's no downside. The "1080p is good enough" (or the "no one will be able to see a difference") crowd could still enjoy their 1080p to the fullest, as better hardware can always player lighter software to it's MAX. Even the "720p is good enough" crowd could still enjoy their 720p video to it's fullest too... just like older software written for Macs several years ago will run just fine on brand new Mac hardware just made. My current :apple:TV plays my choice of 1080p, 720p or even SD video. Should a 4K option come along, I'd expect it to simply be one more option (not forcing anyone to buy a 4K TV if they are happy with whatever TV they have now).
Score: 9 Votes (Like | Disagree)

F4C4
I don't really understand the hype around 4k... The difference in resolution (HD vs 4K) is not noticed from a distance... And streaming will not have full resolution and frame rate anyways!

Keep your HD TV or buy a bigger screen instead!
Score: 8 Votes (Like | Disagree)

yadmonkey
4K TVs are so tantalizingly cheap, but where are the damn sources?!

If the next Apple TV supports 4K I'll finally have a reason to make the jump.
Score: 8 Votes (Like | Disagree)

Andres Cantu
It seems probable that the Apple TV 4th generation will have 4K. The A8 chip can play it, the name matches nicely, and now this! Plus, they've released new Apple TVs when the iPhones get video recording upgrades (720p with the A4 and 1080p with the A5). Maybe now 4K with the A8?
Score: 5 Votes (Like | Disagree)

Very same thing said when :apple:TV was limited to 720p and some of us wanted it to go 1080p. Funny how before Apple embraces something it doesn't make much sense... but after they move, it makes great sense (go back and look at 1080p wish threads when 720p was Apple's max, or bigger screen phone threads, or NFC, or even front-facing "iSight" cameras when iPad 1 was launched, etc).

No. 4K is literally something you cannot see at the distances people ordinarily sit from a 50-80 inch television. Apple can't make you see it just because they are Apple.

Because you can tell the difference at the distances you use a computer or smartphone. It's a huge difference.
Score: 4 Votes (Like | Disagree)

Thunderhawks
Until this format is widely adopted maybe a 401K is better than 4K?
Score: 3 Votes (Like | Disagree)
Read All Comments