At an event in New York City this morning, T-Mobile unveiled its ninth Un-carrier initiative, which is aimed at business owners. T-Mobile CEO John Legere took the stage to unveil a simple new plan for businesses small and large, which is priced up to 40 percent lower than similar business plans from AT&T and Verizon. 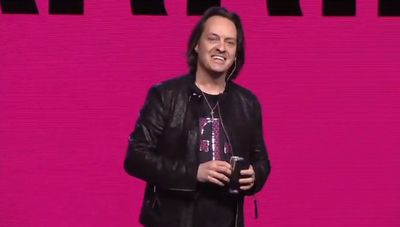 Each line comes with 1GB of data, and T-Mobile is giving businesses multiple options for purchasing additional data. Data can be purchased per line or pooled and distributed between many employees. Pooled data costs $4.75 per GB at a 100GB minimum and drops to $4.25GB at 1TB, but there are also options to purchase unlimited data for $30/line or 2GB of data for $10/line.

Customers who have a T-Mobile business line through work will be able to get discounted service for their families as well, using T-Mobile's new Business Family Discounts plan. With a standard cell phone family plan, the first line is the most expensive and the second line is less expensive. At T-Mobile, this works out to $50 for the first line and $30 for the second line. With Business Family Discounts, the person's work line counts as the first line, dropping the price of the first family line. According to John Legere, this can save families of two up to $438 per year, and it's available to all T-Mobile customers beginning today.

On the consumer end, T-Mobile's announced "Carrier Freedom," which is an expansion of the company's pledge to pay early termination fees. T-Mobile's early termination payments now cover device payments and leases, letting customers on plans like AT&T Next switch to T-Mobile. The company will pay up to $650 per phone to customers who switch carriers.

T-Mobile's final "One More Thing" announcement was the "Un-Contract," which ensures that customer's rates may go down, but they won't go up. All of the company's promotional plans are now permanent, and no unlimited data plan will change for two years.

Over the course of the last two years, T-Mobile has aimed to disrupt traditional mobile service with its "Un-carrier" initiatives. The company began with uncoupling device costs from service costs in 2013, and then went on to offer several additional incentives to encourage customers to switch to the carrier, including paying early termination fees, offering a JUMP! upgrade plan, unlimited texting and 2G data in 100 countries, free streaming music from Spotify, Rdio, iTunes Radio, and Pandora, one week free trials to test the T-Mobile service, Wi-Fi calling, and data rollovers.

Flow39
Go T-Mobile! They're the only carrier shaking up the industry, and I'm staying with them!
Score: 26 Votes (Like | Disagree)

rohitp
The only thing that can make T-Mobile perfect is improving data coverage. It's great where I live (Austin) but is spotty outside of major metro areas here. Only a problem when I'm driving somewhere...
Score: 15 Votes (Like | Disagree)

bennibeef
Its crazy that T-Mobile in the US is all about uncarrier and shaking things up but mother T-Mobile Germany(Telekom) is there doing nothing like it and is like the traditional carriers
Score: 8 Votes (Like | Disagree)

MattMJB0188
This is great, except when your traveling on a business trip and you find your iPhone 6 switching back and fourth from EDGE to 4G to No Service.
Score: 7 Votes (Like | Disagree)

The only thing that can make T-Mobile perfect is improving data coverage. It's great where I live (Austin) but is spotty outside of major metro areas here. Only a problem when I'm driving somewhere...


Yeah I'd love to try out T-Mobile, but in my area the coverage can be pretty spotty from what I've heard. Actually I've heard from many people that it's spotty all over and not very fast. Verizon is pricey but it's fast and everywhere with great customer service that keeps giving me free data. I know I've mentioned this before, but when I started with them in late 2012 (previously with AT&T) after the iPhone 5 launched I had 2GB of data and now for $10/mo cheaper I have 7GB. The latest free thing they gave me, which I'm not sure if I've mentioned, is free data for our iPad Mini 2. I called to cancel it and they were like "Oh ok, you can have iPad data for free then." I'm almost certain that T-Mobile is a big reason why they're acting this way, but as long as they keep me happy then I don't care.

The best thing that ever happened to the US cellular industryat least for the consumerwas the government's rejection of AT&T's merger with T-Mobile. Let this be a lesson that sometimes anyone can get things right. Even the federal government.
Score: 6 Votes (Like | Disagree)
Read All Comments