Following Apple's unveiling of a March 9 media event that will most likely focus on the pricing and launch date for the Apple Watch, Swiss watchmakers Swatch, Frédérique Constant and Alpina have recently released more details regarding products that will be residing in the same smart wearable space as the Apple Watch (via Watch Insider).

Swatch yesterday announced the Swatch Touch Zero One, a new smartwatch with a dedicated touch screen and a focus on durability and outdoor activity. The sports-heavy focus comes thanks to the company's partnership with the Beach Major Company, which specializes in organizing and putting on Beach Volleyball competitions.

Besides volleyball specific functions like counting "power hits" and "power claps", the Touch Zero One will apparently compete most directly with the Apple Watch Sport, thanks to its enhanced durability, lightweight frame, and sweat-proof band.

"Beach Volleyball is a wonderful sport, a thrill for the players and very exciting for the fans," said Swatch Group CEO Nick Hayek. "We’ve had great fun in the past and now we want to push it further with the new Major Series in collaboration with the FIVB. With the players we share a passion for this great, young sport and look forward to the upcoming tournaments.”

Lacking from the Touch Zero One, however, is any mention of non-fitness related content such as phone, text, and e-mail notifications, even though the company confirmed the device will sync with a smartphone app. Swatch says the Swatch Touch Zero One will be "available this beach volleyball summer season" and cost those interested around $159.

Watch Insider also reported on the partnership between Swiss luxury watchmakers Alpina and Frédérique Constant, who have taken a different approach to the smartwatch business and introduced "smart" components into otherwise traditional timepieces instead of crafting an entirely new smartwatch line.

The created platform, called Manufacture Modules Technologies (MMT), powers the new line of Swiss Horological Smartwatches and allows for a device that tracks sleep and activity in real time. It also syncs automatically with a smartphone app, allowing users to break down the information curated by the device into daily, weekly, or monthly categories. No confirmation was given but the price of the device was suggested to start at around $500 and go to over $1,000, with a planned May launch date.

“The Swiss Horological Smartwatch is the synthesis of high-tech innovation and traditional Swiss watch craftsmanship; it is the link (no pun intended) between modern and classic, and the bridge between Silicon Valley and Switzerland," said co-founder and CEO of the Frédérique Constant group Peter Stas. "There is no digital screen on our Swiss Horological Smartwatch. Instead, the beautiful laser cut hands on the watch dial display information in analog form.”

A few companies who have been in the watch business for a while have reversed course - including Swatch itself - on dismissing the trend of smartwatches, announcing new products to be released around the launch window of the Apple Watch or sometime later in the year. More and more companies are announcing their own product additions to the smart wearable trend almost every week in preparation for the Apple Watch, which new rumors suggest could launch within the first week of April.

KD7IWP
Too bad that's a photo of an iPhone showing a screenshot that is not from iOS...
Score: 26 Votes (Like | Disagree) 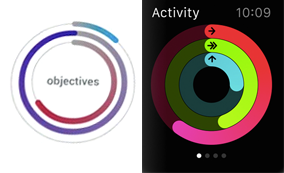 I wanted Apple to again break the paradigm. I didn't want a better watch (I don't and won't wear a watch) I wanted a highly-functional wrist-worn computing device.

The Watch is the complete opposite of the iPhone, as far as surpassed expectations. With the phone, it was far more than was expected:


Somewhere along the line, Jony got caught up in the word "watch." This to me is somewhat humorous as he once said that Apple is careful to not give things a name too soon because it pushes thinking in that direction. But it is obvious to me that that is exactly what they did.

Yep. That's what is so heavily ironic about the entire Watch design: that Jon Ive is supposed to be so against skeuomorphism.

Yet Apple made it about as skeuomorphic as you can get by bringing in horological experts for inspiration, designing it to look like a wristwatch, naming it "Watch", spending a lot of time on fashion bands, and even throwing in a totally skeuomorphic rotating crown.

A lot of people expected a breakout futuristic, unique design. Instead, Ive came out with the same old rounded rectangle motif that he clearly feels most comfortable doing... and then covered it in a skeuomorphic patina to make it even a safer design.

Yes, they'll sell millions. But it is a safe product, not a bold one.
Score: 4 Votes (Like | Disagree)

Having smart components inside a traditional watch is actually a really good idea. You accomplish the task while not sacrificing the look. I personally think the smart watches that are coming to market are too bulky and ugly. But put some components in a slimmer, more traditional time piece and I may be persuaded to actually get one. Good work Swiss.


I'm totally with you on this one. Rather than competing directly with an all digital, app driven watch, stick with what you're good at and add sensors that talk to your phone.

There seems to be a smell of fear from some watch-makers that they will be obsolete for some reason. They won't. Not to mention, they are mechanical companies that are about to compete with hardware and software designers. It's like a bicycle maker deciding to make airplanes. Same end goal (from here to there), but totally different in every way (I just LOL'ed at myself when I remembered the wright brothers)
Score: 4 Votes (Like | Disagree)

mainer4101
Having smart components inside a traditional watch is actually a really good idea. You accomplish the task while not sacrificing the look. I personally think the smart watches that are coming to market are too bulky and ugly. But put some components in a slimmer, more traditional time piece and I may be persuaded to actually get one. Good work Swiss.
Score: 3 Votes (Like | Disagree)
Read All Comments

Sunday September 25, 2022 10:57 am PDT by Sami Fathi
As we approach the end of a busy product release season for Apple with only new iPads and Macs left to be announced over the next month or so, we're also setting our sights on 2023. Apple is rumored to have several major products in the pipeline for next year, including new Macs, a new HomePod, a VR/AR headset, and so much more. Other than new iPhones and Apple Watches, which are expected...
Read Full Article • 113 comments