Apple has not provided details on when the Apple Watch might begin shipping to customers beyond the broad "April" launch date shared by CEO Tim Cook, but new information provided to MacRumors suggests the Apple Watch could see a release more towards the beginning of April rather than the end of the month.

According to a reliable source that spoke with MacRumors, Apple is planning to begin moving Apple Watches to centralized distribution points in the U.S. during the first few days of the month, with an Apple Watch release possibly coming during the first full week of April, between April 6 and April 10. 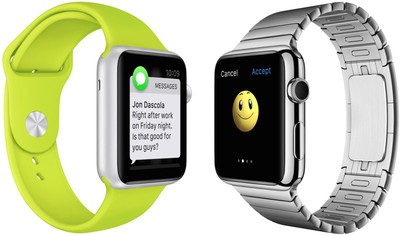 Apple will be live streaming its March 9 media event, and MacRumors will also be providing live coverage of the information the company unveils about the Apple Watch.

This could really be taken the wrong way. :eek::eek:

cmChimera
My wrist is ready.
Score: 10 Votes (Like | Disagree)

2457282
Que the Chinese lady interpreter. No worries, I have been practicing.:cool::D:p
Score: 7 Votes (Like | Disagree)

GuitarDTO
Seems like it would be sooner after a March 9th media event. I'm skeptical. Either way, looking forward to seeing one in person.
Score: 7 Votes (Like | Disagree)

I heard that it will work with a third party glucose monitor. My guess is you might be able to deduct that as a medical expense, but don't try justifying the Apple Watch Edition to get you over 7.5% of your adjusted gross income. Ask a tax accountant, but the common sense test says the Watch is a personal expense.


Ask your doctor if the Apple Watch is right for you!
Score: 4 Votes (Like | Disagree)

dontwalkhand
This is how I name all of my devices from Apple: