With the Apple Watch on schedule to ship in April and some developers asked to have apps readied for this month, we are beginning to see a slow trickle of apps surface for the wrist-worn device. Todoist on Monday became the latest software maker to tease their work-in-progress Apple Watch app, sharing a video and screenshots of the upcoming to-do app with MacRumors this morning. 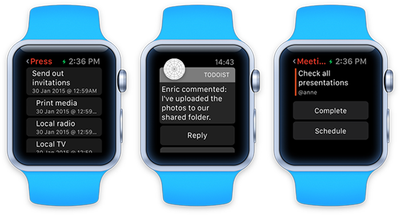 Todoist [Direct Link] aims to bring its popular to-do app for iPhone and iPad to the wrist with a simple Apple Watch app that will provide task management at a glance. When paired with an iPhone, the app will enable users to view their upcoming tasks and categories, reply to comments, and schedule or mark complete tasks. Todoist tells us that the video below is missing the task filter view, but plans to add the feature soon.


Once inside the main Todoist app, the user can access their Inbox, Projects (and full task lists within each project), Labels, Filters, and a 'Today' view showing all tasks for the day, as well as overdue tasks. When you tap on a task to get the detailed view, you will be able to see the task's associated labels, its due date, its priority level, and you will be able to either "complete" or "postpone" the task directly from the watch. If you don't want to complete or postpone the task, you use the watch's microphone to explicitly assign a time/date to the task (this feature is still in development)."

Apple made its WatchKit SDK available alongside the release of iOS 8.2 and Xcode 6.2 beta in November, although developers are limited to an emulator-only development environment until the Apple Watch is released. For now, a third-party Tesla app and concepts of what apps such as Instagram and Uber could look like provide the best teaser of what the future of the wrist holds.

Gudi
Finally To-Do lists on my wrist! More solutions to problems I don't have.
Score: 27 Votes (Like | Disagree)

heeloliver
Let me sum up the comments so you don't have to post:

I don't want an Apple Watch.

This is a dumb idea.

I want full-blooded apps, not ports to my iPhone apps.

The Apple Watch is ugly.

I think that covers it, let me know if there's anything I missed!
Score: 22 Votes (Like | Disagree)

rohitp
The more I see of this device, the less I want it.

I haven't worn a watch ever since my first cell phone with a small LCD display. Why in the heck would I want to add another device? It's nice having my wrist nekkid. :eek:
Score: 19 Votes (Like | Disagree)

Aluminum213
Does it come with a magnifying glass to read it?
Score: 13 Votes (Like | Disagree)

Let me sum up the comments so you don't have to post:

I don't want an Apple Watch.

This is a dumb idea.

I want full-blooded apps, not ports to my iPhone apps.

The Apple Watch is ugly.

I think that covers it, let me know if there's anything I missed!

You left out all of the Apple Defense Corps counterpoint...

"I can't wait for an Apple Watch."

...and then 100 odd or rare use cases where we conjure up some situation where it would be somewhat-to-tangibly easier to peek at a wristwatch screen rather than pull the iPhone out of our pockets (that must be in close proximity to the watch). I saw one the other day about a guy being "all bundled up for a big winter storm" so he was rationalizing the utility of being able to look at the watch so it could help him make the decision on if he needs to dig the phone out of the inner layers of clothing. :rolleyes: Might as well be: "if I was in space and the iPhone was inside the space suit but I had managed to strap the watch around the outside, it could be a LIFE SAVER if I needed to get a NASA notification right then (and all other communication systems of the space suit had failed)." At least in one like that we can spin how it can save a life instead of getting "what R U doin?" messages to us a few seconds faster than a vibrating iPhone->read the text process.

The "convenience" argument is hilarious as "we" were generally quick and passionate about pounding a concept like Google Glass though something like that could bring notifications & todo lists to our "can't dig out my iPhone" or "can't afford the valuable seconds lost to digging out my iPhone vs. checking a watch face" scenarios without having to even move our arms or head at all.

Personally, I'm still looking for something beyond "added convenience" and "time savings" vs. just using the bigger-screen, more functional device already on hand (and probably in your hand 100 times a day). These weird use cases "we" are offering in trying to rationalize it show the lengths even we (a very pro-Apple crowd in general) are having to stretch to try to make it make sense. If Google Glass had been Apple Glass, I wonder it we would be spinning: "suppose I was armless" or "suppose my arms were tied"... "but I needed to get my notifications or todos anyway." Now step that trying-to-rationalize-it challenge out to the much less "Apple is God" masses. Why are those masses going to pay at least $350 for it? (because they- not us- make brand new Apple products a "next big thing" hit... or miss).
Score: 7 Votes (Like | Disagree)

Wednesday June 29, 2022 5:23 pm PDT by Sami Fathi
The redesigned MacBook Air with the all-new M2 Apple silicon chip will be available for customers starting Friday, July 15, MacRumors has learned from a retail source. The new MacBook Air was announced and previewed during WWDC earlier this month, with Apple stating availability will begin in July. The MacBook Air features a redesigned body that is thinner and lighter than the previous...
Read Full Article • 280 comments