Digital agency Huge yesterday released a set of renderings showing off their concepts for how existing popular apps like Fandango, Foursquare, Chase Bank, and others could take advantage of the Apple Watch when the smartwatch launches in the coming months.

Breaking down the major new features of the Watch, including the Taptic Engine, Voice command, and the Digital Crown, Huge reminds readers that none of the renderings are based off any confirmed apps from the companies or Apple itself, but they do offer an interesting look at the possibilities.

Huge also smartly points out that the success or failure of apps on the platform lies in developers embracing its smaller-scale and not just shoehorning existing iOS user interfaces and features into the Watch but making something new and unique. Interaction between the Apple Watch and the iPhone will of course be key, however.

Features such as native voice control, haptic feedback, and a digital crown that can be used to magnify, scroll or zoom within apps crack open a whole new world of design requirements and opportunities. The smartest companies will do more than offer facsimiles of their existing apps; they'll create custom experiences that exploit the watch's unique interface.

Tackled first are "existing apps" that the company reimagines for the wearable platform, namely Uber. Pointing out Uber's dependency on tracking a car, Huge thinks possible voice control, a quick messaging system between the user and driver, and easy peeks at real-time car tracking would push the app to be even more popular on the wrist.

On the banking side, the company takes a look at the possibilities for an app like Chase, thinking the transfer of money, checking balances, and alerts for bills due and deposits made could provide even more ease-of-mind for customers banking on the go.

On the more social side, Huge mocks up an idea for movie-going app Fandango consisting of electronic ticketing, alerts for movie times, and, of course, theater time listings for movies nearby.

Perhaps most questionable, but also one of the most interesting, are Huge's ideas for Instagram on the Apple Watch. Though most users probably wouldn't mind taking out their iPhone to check the service, Huge envisions the Watch version of the app as more of a companion piece: alerting users to photo comments, tags, and likes, with possible photo browsing relegated to the digital crown. The company also points out the significant gain any news outlet, like The New York Times, could receive from having alerts and breaking news sent right to their readers' wrists.

Next, the company looks at "new use cases" the Apple Watch will enable, thanks to the release of WatchKit to developers a few months ago. Though iBeacons have been the source of some questionable developments about the possibility of location-based advertisements hitting the Apple Watch, Huge points to a few clever alternatives, like the watch notifying a user passing a grocery store that they have milk or bread on their shopping list, for example. More broadly, Huge envisions a native to-do list app in the vein of Apple's Reminders but which could easily best its iPhone counterpart due to its easier-to-access location on the Watch.

The Apple Watch launch is rapidly approaching, although a rumored March release date has yet to be confirmed by Apple. Apple has promised it will share more information on the Watch as its launch nears, and third-party developers have been hard at work on their Apple Watch projects for some time now. But for the time being, readers can see the possibilities outlined above, as well as others including a kitchen assistant, haptic feedback-fueled navigation, and a sports-focused news app, in Huge's feature published at Fast Company.

Apple Knowledge Navigator
Why have breaking news on your wrist when you could breaking MacRumors?... 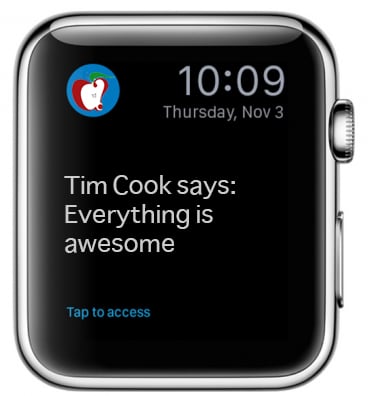 Just the kind of motivation I need!
Score: 7 Votes (Like | Disagree)

I have to confess that am still not sold on the idea of the watch, but time will tell. Thought these renderings look really cool.

Still don't get this. Why would you wanna see information, photos, etc... on such a tiny device when your bigger screen phone is right on your pocket. Are we getting this lazy? I really thought Apple would present something different, but this is just the same as every other smartwatch out there. I still think this won't take off like the iPhone or iPad did, but we'll see if developers can make this attractive.


If nothing else, for things you might want to glance at your phone for: the time, a notification, a quick message to a friend.

In many ways, we convinced ourselves an iPad was necessary. Even though we had devices already that did what iPad could do, we spent £500 to use our laptops and phones less.
Score: 2 Votes (Like | Disagree)

rjlawrencejr
Personally, I'm excited about this product. I know some of you say you already have a phone. That's true, but I like the idea I don't have to keep my phone in my pocket for information or the ability to contact someone. No more fumbling around or constantly reaching for my phone. I like the fact that a wearable can be discreet.

Remember the data it presents will be brief, so I doubt you'll see people with their heads buried in their wrists. I had a SPOT watch back in 2006-09. I liked it. It contained info I could quickly glance at - scores, weather, some headlines. The only reason I stopped using it was somehow the charger stopped working and then the watch went dead and at the time I couldn't afford to get the base replaced/repaired. The only other negative to the SPOT watch was that it required a subscription except for the most basic info. Fortunately, Apple Watch won't require that (however I am sure some developers are looking at ways to exploit the watch's capabilities for profit).

Does it appear I will be paying $400 or more to be a beta tester? Maybe so. But a product can never be perfected in a lab. It needs random real world users. I look forward to seeing this product grow.
Score: 2 Votes (Like | Disagree)

kdarling
Some of those examples scare me :)

Really? My Visa statement is ready????

For what it's worth, I got very tired of too many notifications making it to my watch. It became a situation like the boy crying "wolf!" Getting buzzed too many times makes you crazy.

So I now only allow the very most important things (to me) through.

However, I can see where someone who's an attention junkie (my daughter!) would love all the notices. Or, of course, if you sometimes get emails that must be replied to.
Score: 2 Votes (Like | Disagree)

Regarding Instagram, most of us would probably consider notifying every "likes" and "tags" to be quite pointless, a borderline spam really.

I am hoping most app designers would be wise enough to push only useful information to Apple Watch.


Haha nope my younger sis gets basically off off it seeing all the "like" notifications popping up on her lockscreen. Her world breaks down when a pic gets less than 100 likes. Kids these days

I still don't get it. People buy huge smartphones to use but then get a tiny smartwatch for convenience so they do not have to pull out their phone? Schizophrenic much?
Score: 2 Votes (Like | Disagree)
Read All Comments