PDF reader app GoodReader has removed a number of operations related to iCloud Drive to comply with Apple's guidelines. Specifically, developer Good.iWare has disabled GoodReader's ability to create and delete new folders inside iCloud along with the ability to move iCloud files. The developer called the iCloud usage policy "mandatory" and also included VoiceOver compatibility along with a big fix for opening iCloud containers. 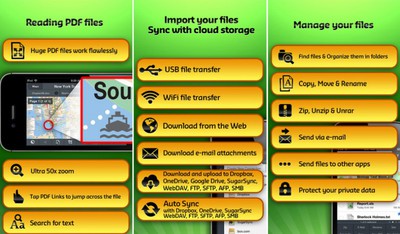 The changes to GoodReader come a week after Panic's file management app Transmit was forced to disable its send to iCloud Drive feature which also led to the removal of all Share Sheet file transfers to other third-party services. However, Apple later reversed its course on Transmit as the app reinstated its sending feature in an update shortly after.

While Apple introduced a number of new features with iOS 8, a number of developers have been forced to remove key features from their apps for reasons that are unclear. For instance, Notification Center widget Launcher was removed after the launch of iOS 8 in September, and Apple has also asked apps like Drafts and Neato to remove widget functionality. Apple also asked calculator app PCalc to remove the calculator functionality from its Notification Center widget, but later reversed its decision.

GoodReader is a $4.99 download for the iPhone and iPad. [Direct Link]

It's good to see this developer complying with requirements that ensure the security of all iOS users valuable data stored in iCloud.

I understand some people do value functionality over security, but for the vast majority of people iOS is the number one choice because Apple emphasises protection of security and privacy.

Apple, forget it. You're just hell-bent on making iCloud as unusable as possible for no apparent reason. As much as I don't want to, I'm sticking with Dropbox.
Score: 32 Votes (Like | Disagree)

maflynn
Unbelievable, I think Apple goes out their way to annoy consumers and developers.
Score: 28 Votes (Like | Disagree)

fluchtpunkt
Doesn't matter, they will reverse that decision in one week. ;)


It's good to see this developer complying with requirements that ensure the security of all iOS users valuable data stored in iCloud.


Please tell us how GoodReader's features endanger the security of user data.
Score: 15 Votes (Like | Disagree)

Wednesday June 16, 2021 7:11 am PDT by Hartley Charlton
With no sign of redesigned MacBook Pro models at this year's WWDC, when can customers expect the much-anticipated new models to launch? A number of reports, including investor notes from Morgan Stanley and Wedbush analysts, claimed that new MacBook Pro models would be coming during this year's WWDC. This did not happen, much to the disappointment of MacBook Pro fans, who have been...
Read Full Article • 227 comments

Wednesday June 16, 2021 10:49 am PDT by Juli Clover
Apple CEO Tim Cook this morning participated in a virtual interview at the VivaTech conference, which is described as Europe's biggest startup and tech event. Cook was interviewed by Guillaume Lacroix, CEO and founder of Brut, a media company that creates short-form video content. Much of the discussion centered on privacy, as it often does in interviews that Cook participates in. He...
Read Full Article • 316 comments