iOS 8 Now Installed on Over Half of Active iOS Devices

After five and a half weeks of availability, Apple's iOS 8 operating system is now installed on 52 percent of iOS devices, according to new numbers posted on Apple's App Store support page for developers.

iOS 8's installation numbers have increased approximately four percent over the course of the two weeks, which means adoption numbers are on the rise after several weeks of stagnation. During Apple's October 16 iPad-centric event, Apple CEO Tim Cook said that iOS 8 was installed on 48 percent of devices as of October 13, and before that, the OS was installed on 46 percent of devices on September 21. 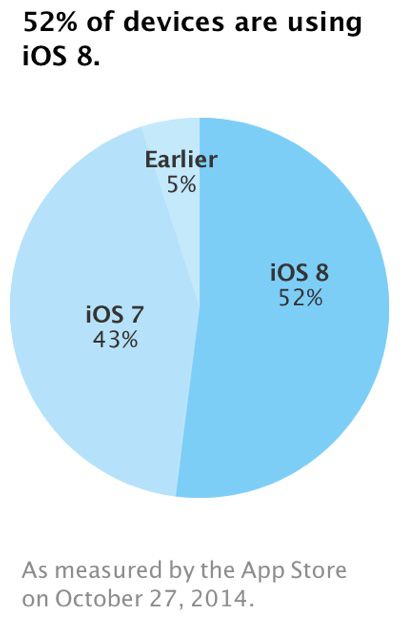 iOS 8.1 also addressed several notable bugs that had been present in the operating system for several weeks and that were the source of several user complaints about iOS 8. The update fixed Wi-Fi connection issues, Bluetooth problems, screen rotation bugs, and more.

Apple's own iOS 8 adoption estimates are based on App Store usage and are mirrored closely by data from MixPanel, which puts iOS 8 adoption at just over 54 percent. MixPanel's numbers suggest installation rates have been trending upwards since the release of iOS 8.1.

iOS 8's release was plagued with a number of early bugs that may have scared users away from updating. Ahead of launch, all HealthKit-enabled apps were pulled from the App Store due to a major HealthKit bug, and the fix for that issue, iOS 8.0.1, brought its own bugs, disabling cellular service and Touch ID for thousands of iPhone 6 and 6 Plus users.

iOS 8.0.2 fixed the problems introduced with iOS 8.0.1 and brought several other bug fixes, and with iOS 8.1 fixing even more issues with iOS 8, the operating system is far more stable now than it was in the days following its release.

batting1000
Buggy Software Now Installed on Over Half of Active iOS Devices
Score: 33 Votes (Like | Disagree)

teslo
if you been havin iOS problems i feel bad for you son, i got 99 things to do but b1tchin ain't one.
Score: 17 Votes (Like | Disagree)

afsnyder
I wonder how many people updated their older phones thinking they could get Apple Pay.... even though it was only available to iPhone 6 and 6 Plus because of hardware..
Score: 16 Votes (Like | Disagree)

RealKrS
Probably also increased when people (like myself) realized that they could no longer use Pages, Numbers etc without updating. Was forced to update my 3rd gen iPad earlier today in order to use Pages.
Now I can finally use Pages on my NOW UNSTABLE iPad. :apple:
Score: 13 Votes (Like | Disagree)
Read All Comments