That marks a very slight increase in adoption over the past two weeks, as back on September 21, iOS 8 was installed on 46 percent of devices. 47 percent of iOS users continue to stick to iOS 7, possibly due to a number of bugs that have plagued the launch of iOS 8. 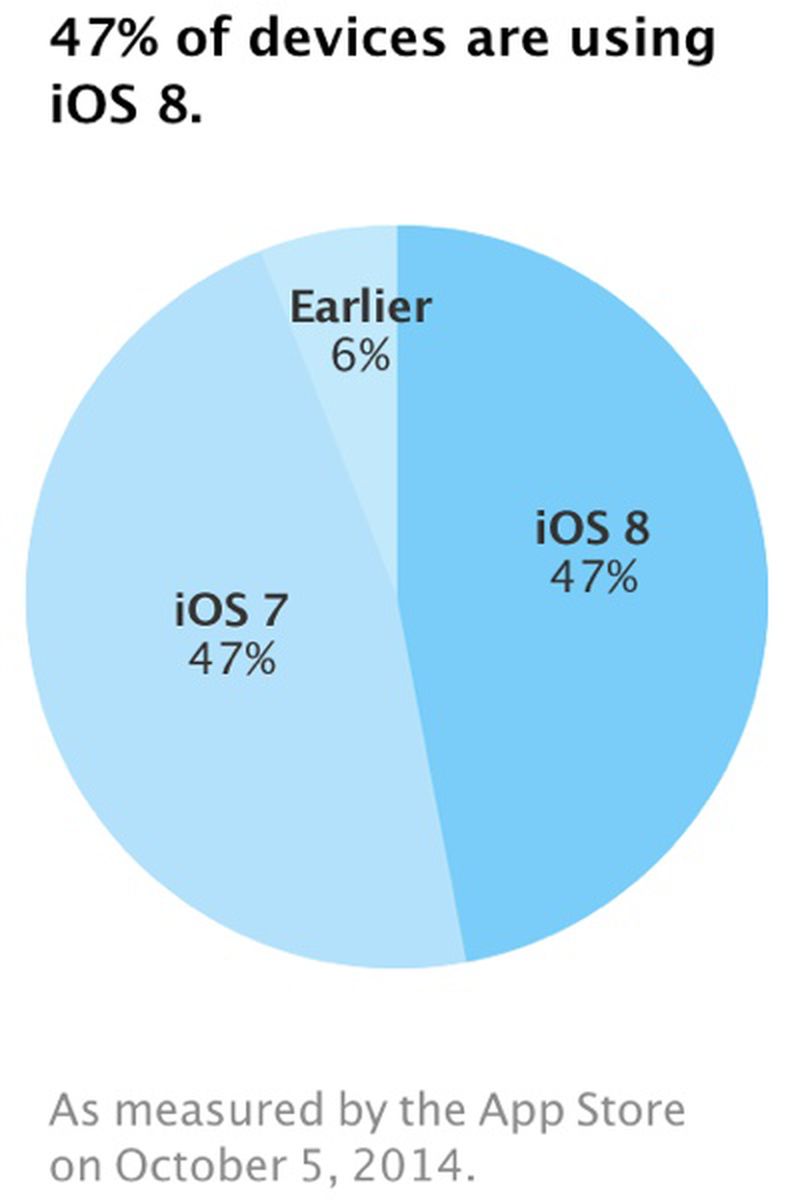 Just ahead of the launch of iOS 8, all HealthKit-enabled apps were pulled from the App Store due to a major HealthKit bug. A fix was quickly released, but the update, iOS 8.0.1, disabled the cellular service and Touch ID functionality on iPhone 6 and 6 Plus devices.

iOS 8.0.2 fixed the problems introduced with iOS 8.0.1 and brought several other bug fixes, but the publicity surrounding the iOS 8.0.1 issue may have discouraged some users from updating.

Along with the critical bug introduced with iOS 8.0.1, several other problems have come to light. An iCloud Drive issue with the "Reset All Settings" option causes iCloud Drive documents to be deleted from iCloud, and multiple users have experienced problems with Bluetooth. Furthermore, iOS 8 users have complained of other issues with the operating system, including slow wi-fi speeds and excessive battery drain. 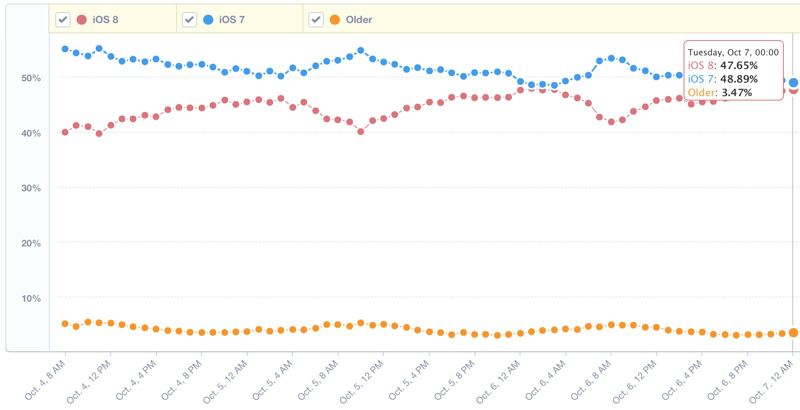 In late September, Apple stopped signing iOS 7.1.2, making it impossible for iOS 8 users to downgrade back to a previous-generation operating system. The company is working to combat the issues facing iOS 8, however, simultaneously working on iOS 8.1, 8.2, and 8.3.

iOS 8.1, seeded to developers last week, fixes at least one major problem, repairing the Bluetooth pairing issue many users have been facing. The update also includes support for Apple Pay, which is expected to debut in October.

sosull
An over-the-air update is a tough sell on 8GB or 16GB devices – lots of people wouldn't want to delete photos and apps to make way for a software update.
Rating: 95 Votes

Alisstar
This isn't surprising to me at all. I have friends who are still on iOS 7 because they don't have enough free space available to upgrade. When I tell them they can upgrade by connecting their phones to their computers, and thus, doing it through iTunes, they look at me like I'm crazy, or like it's 2008 or something.
Rating: 71 Votes

jcw5002
Most of my friends still haven't updated. Why? They have 16GB iPhones with not enough space! (I told them about iTunes update, but that's extra work.)

carjakester
honestly wish i was still on 6. 7 was okay but iOS 8 has had nothing but problems for me and many others. Unacceptable and very unlike apple for this to happen.
Rating: 53 Votes

elmateo487
Yeah... its not because of bugs.. It is because people do not know anything about their phones, and the vast majority just let that red 1 sit on their setting app, and the people that actually try to update? They don't have 2 free gigs of space available, and they don't know how to update from their computers.

Am I a pessimist? Yes.... because I work at a technology help desk. And no one.... knows anything.
Rating: 50 Votes

Management
I have constant problems with iOS 8, mostly crashing apps and apps not rotating in landscape; both on iPad and iPhone 6.

An over-the-air update is a tough sell on 8GB or 16GB devices  lots of people wouldn't want to delete photos and apps to make way for a software update.


A few friends I know have not updated for this very reason.
Rating: 21 Votes

The fact the OS runs like crap on older devices combined with the fact they won't let you downgrade your OS screams of planned obsolescence. There is no excuse for them to kill the signing of an older OS. They'll throw out security and jailbreaking as reasons why they don't allow device downgrades, but that's nonsense. Jailbreaking is going to happen regardless and we can determine for ourselves whether it's better to have limited security holes vs a near inoperable device.

I love my Apple products, but I constantly feel like I am being forced into upgrading and having them kill off my older devices before they need to be. Heaven forbid you upgrade a device and you find it kills the battery and is no longer quick running.

In fairness, it's not just Apple. The cell companies do the same thing with Android devices. They will jam upgrades down to you even if you don't want them. Frustrating.

So I now have an iPhone 5 and an iPad 3 that both run slower and are now jerky moving between screens, they also have a significantly shorter battery life. I told my wife to hold off with her 4s...besides, she doens't have the space to upgrade if she wanted to.

On a non-personal side, I work at a school district with 10,000 iOS devices. I have nearly all devices sitting at 7.1.2, but now any new devices that have to be supervised will have to be at 8. So as a result there is no way to keep all devices at the same level. This is something I control in both Windows and OSX environments. I don't consider allowing iOS upgrades OTA due to major bugs in new releases. Last year I had the upgrades blocked on the network, and thank god. The supervision issues with iOS 7 were a train wreck with kids. The fact I cannot place any iOS I find best, most secure and most compatible with certain level of apps is very poor on Apple's part. iOS 8 has a bug that doesn't allow me to place a restriction on the device before it is enrolled (long story why). Again, a bug that is enough reason I wouldn't allow it on our devices given the choice.

Thanks for letting me vent :-)
Rating: 19 Votes