iOS 8.1, build 12B410 for iPads and 12B411 for iPhones, is available immediately as an over-the-air download and after updating, it will allow iPhone 6 and 6 Plus owners to access Apple Pay, Apple's new payment service. With Apple Pay, the iPhone 6 and 6 Plus can be used to make payments in both retail stores that support NFC and participating apps. Apple has also released Apple TV software 7.0.1. 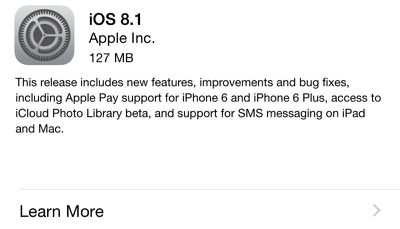 Apple Pay support for iPhone 6 and iPhone 6 Plus (U.S. only)

Messages includes new features, improvements and fixes
- Adds the ability for iPhone users to send and receive SMS and MMS text messages on from their iPad and Mac
- Resolves an issue where search would sometimes not display results
- Fixes a bug that caused read messages not to be marked as read
- Fixes issues with group messaging

Accessibility improvements and fixes
- Fixes an issue that prevented Guided Access from working properly
- Fixes a bug where VoiceOver would not work with 3rd party keyboards
- Improves stability and audio quality when using MFi Hearing Aids with iPhone 6 and 6 Plus
- Fixes an issue with VoiceOver where tone dialing would get stuck on tone until dialing another number
- Improves reliability when using handwriting, Bluetooth keyboards, and Braille displays with VoiceOver

Also included in iOS 8.1 is support for SMS relay, a Continuity feature designed to allow Macs (running Yosemite) and iOS devices like iPads to receive SMS messages routed through a user's iPhone. Instant Hotspot is also enabled through the iOS 8.1 update, letting Mac users remotely activate the Personal Hotspot capabilities of an iPhone when two devices are near each other.

Along with those major features, iOS 8.1 reinstates the Camera Roll, which was removed with iOS 8, and it gives all iOS 8 users access to iCloud Photo Library, Apple's new cloud-based photo storage solution. The removal of the Camera Roll turned out to be a controversial decision, with Apple opting to re-add it after iOS users asked for the feature to be returned.

iOS 8 has not been Apple's smoothest software release, with users encountering quite a few bugs in the operating system. While multiple issues were fixed with iOS 8.0.2, released in late September, iOS 8.1 fixes several other bugs, including a problem that caused some iOS 8 users to have trouble pairing their phones with their Bluetooth devices. According to release notes, iOS 8.1 also fixes several other complaints users have had about iOS 8, including problems connecting to Wi-Fi and issues with screen rotation.

darkslide29
Oh I don't think so, Apple. I think I'll sit this one out for a few hours. The last time I downloaded an update so quickly, my phone stopped functioning as a phone. I will let others try this first, and then maybe I'll feel it is safe to proceed.

As a 'wise man' :cool: once said, Theres an old saying in Tennessee  I know its in Texas, probably in Tennessee  that says, fool me once, shame on, shame on you. Fool me, you cant get fooled again.
Score: 32 Votes (Like | Disagree)

ashton18
I wonder how many people will go to Walgreens/McDonald's today just for Apple Pay.
Score: 30 Votes (Like | Disagree)


I am taking my Apple TV to McDonalds today!
Score: 27 Votes (Like | Disagree)

BeyondtheTech
What most readers are doing right now...

Just added a Citi card to ApplePay (done via passbook). It had to send a text with an activation code on file to verify my identity, but the process took about 2 minutes. About to go try it on a vending machine at work that supposedly takes NFC. Report back in a few minues.

Held my iPhone up to the NFC reader on the vending machine and my screen automatically turned on and asked me to authenticate with Apple Pay. I tried the Citi card twice, and it was declined (yes, I have enough available credit for a $1.60 purchase so not sure why) so maybe they're still working out the bugs. I added a Chase card and it worked.

It's pretty neat, but to be quite honest, I'm not sure if it's any faster than swiping a card.

And to clarify things: THIS WAS A REGULAR NFC-ACCEPTING SODA MACHINE. No special requirement for the merchant to support ApplePay.
Score: 16 Votes (Like | Disagree)

yg17
For anyone who still doesn't believe that Apple Pay works anywhere NFC is accepted. Did you guys see Dynamic Vending on the list of merchants accepting ApplePay on apple.com? Me neither.
Score: 15 Votes (Like | Disagree)
Read All Comments