Apple has plans to introduce the next-generation iPad Air in October, according to Taiwan's Commercial Times [Google Translate]. The site says the updated tablet will enter production in September, shipping next month.

Commercial Times also suggests that the next-generation Retina iPad mini might not launch alongside the iPad Air, coming instead in early 2015, with the 12.9-inch iPad Pro to follow in the second quarter of 2015. 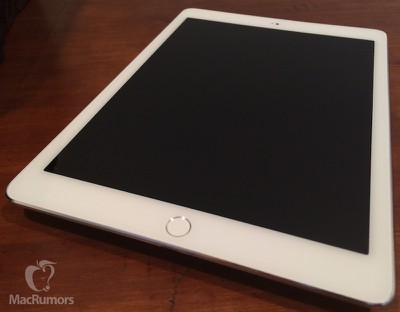 Previous rumors have indicated that both the Retina iPad mini and the iPad Air 2 will be introduced simultaneously at an event in October. Recently, a rumor suggested the two tablets could be introduced at an October 21 media event, but that prediction was quickly shot down by The Loop's Jim Dalrymple. Dalrymple did not, however, rule out an event at another date in October, so an October unveil of the two tablets remains likely. According to recent report from Bloomberg, the iPad Air 2 is in production and the Retina iPad mini 2 is entering production soon.

Both the next-generation iPad Air and Retina iPad mini are expected to gain updated A8 processors, camera improvements, and the Touch ID fingerprint sensor first introduced with the iPhone 5s. Apple's iPad Air 2 may also gain an anti-reflective screen coating and it may also ship in gold, silver, and space gray, much like the iPhone.

iPad Air 2 is a pretty terrible name, if true


How about Air Bud: Golden Receiver
Score: 19 Votes (Like | Disagree)

bushido
i honestly dont really see how this justifies a keynote
Score: 17 Votes (Like | Disagree)

farewelwilliams
CAN'T WAIT TO USE APPLE PAY WITH MY IPAD AIR

benji888
I have always doubted the larger iPad being called "iPad Pro"" ...it's pretty obvious now it will be called "iPad Plus".
Score: 8 Votes (Like | Disagree)