Nordstrom may be one of Apple's first merchant partners when Apple launches its upcoming mobile payment initiative, reports Bank Innovation. Apple is said to be in talks with Nordstrom about its payments service, suggesting Nordstrom could be one of the first retailers to support payments via iPhone.

The "talks" Nordstrom and Apple have been engaged are related to payments -- but the extent of those talks is unclear. Apple was looking for a clothing brand with a large physical reach, our source said, but also with an established and high-end brand. With a strong brick-and-mortar presence, but with a focus on digital innovation as well, our source said Nordstrom was a "great" pick for Apple.

Nordstrom is a logical partner for Apple, as its retail stores already use Apple's iPhones and iPads as point-of-sale systems. According to Nordstrom employees, Apple's mobile point-of-sale systems are purchased directly from Apple and were updated to work with 'the most recent iPhones" just a few weeks ago. Bank Innovation suggests that Nordstrom's current point-of-sale systems, which are said to be the same as Apple's own in-store EasyPay systems, may possibly be compatible with Apple's upcoming mobile payment service.

Earlier this year, a report suggested Apple was speaking with several high-profile retail store chains about a mobile payment service, in order to retailer gauge interest and explore possibilities for a unified payment service, and Nordstrom may have been included in these talks. 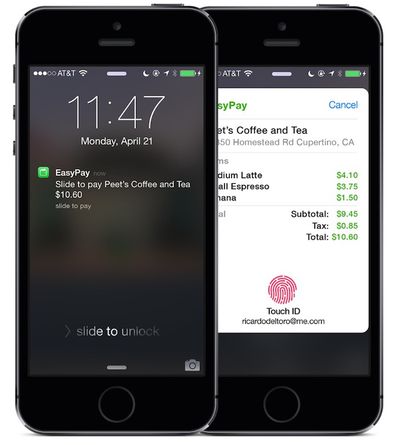 EasyPay mobile payments concept by Ricardo Del Toro
In addition to partnering with retailers, Apple is also said to have signed deals with American Express, MasterCard, and Visa for its mobile payments initiative, which will likely leverage technologies like NFC, Bluetooth, and iBeacons, in addition to Touch ID, Apple's fingerprint-sensing security technology.

According to reports, Apple's payments service will allow iPhone owners to use their devices to make payments both online and in retail stores. Apple is expected to announce its mobile payments initiative during its September 9 media event.

boshii
They need to partner with retailers people actually go to.
Score: 15 Votes (Like | Disagree)

Alphabetize
To make buying those $85 t-shirts even easier!
Score: 14 Votes (Like | Disagree)

Simmias
This is amazing! Now when I shop at Nordstrom once every 7 seven years, I can save 10 seconds on swiping my card!
Score: 8 Votes (Like | Disagree)

Nordstrom's? What % of the iPhone toting population shops there, even twice a year? :eek:

How about getting some "basic" stores on board?

How many of those shoppers do you think are carrying Android devices vs iPhones?
Score: 6 Votes (Like | Disagree)

Nordstrom's? What % of the iPhone toting population shops there, even twice a year? :eek:

How about getting some "basic" stores on board?


You're looking it from the wrong direction. Instead, what % of Nordstrom's patrons own an iPhone? I'd bet 80-90%.
Score: 5 Votes (Like | Disagree)

mainstreetmark
They plan to add these guys 1-at-a-time?

Why not partner with credit card swiper companies or something, so that these sorts of abilities start showing up at gas stations, liquor stores, targets, grocery stores and everywhere else a credit card is manhandled. Once that works spiffily, then we can all collectively work on how to get it to work at restaurants (and if we get off the tip-for-service system during this time, so much the better)
Score: 5 Votes (Like | Disagree)
Read All Comments

Thursday September 29, 2022 12:38 pm PDT by Juli Clover
Tony Blevins, Apple's vice president of procurement, is set to depart the company after he made a crude comment about his profession in a recent TikTok video, reports Bloomberg. Blevins was in a video by TikTok creator Daniel Mac, who was doing a series on the jobs of people he spotted with expensive cars. After seeing Blevins in an expensive Mercedes-Benz SLR McLaren, Mac asked Blevins what ...
Read Full Article • 229 comments

Wednesday September 28, 2022 10:22 am PDT by Juli Clover
Apple has seen high demand for the 6.7-inch iPhone 14 Pro Max, which could lead the company to further differentiate the next-generation iPhone 15 Pro and Pro Max, according to Apple analyst Ming-Chi Kuo. Apple could add exclusive features to the iPhone 15 Pro Max in an effort to encourage more people to purchase the larger and more expensive device. Kuo last week said that Apple asked...
Read Full Article • 308 comments