iPad is the perfect way to be more productive than ever. Its powerful apps are designed to take full advantage of the things only iPad can do. So you'll have everything you need to do what matters most.

The email advertises how customers can create documents, spreadsheets, and presentations with Apple's own iWork software, available for free with every new iPad, and it also points towards Word, Excel, and PowerPoint, which were released for the iPad in March. 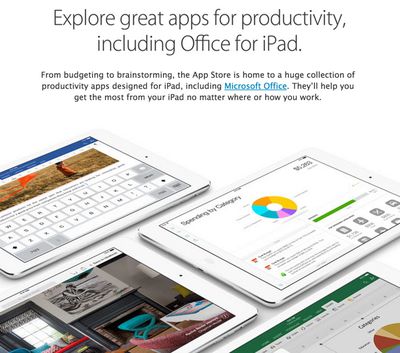 Competitors like Microsoft and Samsung have launched aggressive ad campaigns attempting to position the iPad as a content consumption device without the multitasking capabilities or the software to allow it to serve as a true PC replacement, but Apple has fired back in recent months with an equally aggressive "Your Verse" iPad campaign that shows the iPad being used in hundreds of different ways for a variety of vital tasks that range from composing to choreographing to mountaineering.

Microsoft used the lack of Office software on the iPad as a main advertising point for its Surface tablets throughout 2013, before releasing an iPad version of the productivity software earlier this year. Microsoft has actually seen enormous success with Office for iPad, garnering 35 million downloads as of July, suggesting millions of customers are using their iPads for productivity-oriented tasks like creating documents and presentations.

In addition to sending out emails, Apple launched a promotion for several different productivity apps in the App Store last week, offering discounts on apps like Fantastical, Clear, Notability, Scanner Pro, and more. That sale lasts until August 14.

Apple's focus on productivity comes just weeks after the company inked a deal with IBM that will see the two companies teaming up to push for more iPads in enterprise environments.

Art0fLife
If I want to be productive I'll buy a laptop. There's exactly nothing productive about an iPad/tablet. It's inferior in every way that matters to MacBook, it's not nearly as good for taking photos as even an iPhone, it's way less portable than an iPhone, no more portable than my MacBook, offers little battery advantage if any, to the MacBook, has worse App developer support than the iPhone or MacBook, it's worse to type on than either an iPhone or MacBook... I mean, it's just big enough compared to an iPhone that it's uncomfortable to type on, and neither can dream of comparing to an actual keyboard... I guess you can buy the docks and all, but then why not just by what you're essentially turning the tablet into? *cough* laptop *cough*. Exactly what is more productive about it, again? :rolleyes:

We have an iPad and it's okayish to use for reading emails (not replying), doing light browsing, watching videos where sound quality isn't a concern, playing some games... But that's about where it's usefulness ends. Why are they always trying to shove tablets down people's throats pretending they can even compare to an actual computer? I'll agree, the iPad is the best tablet out there, but tablets are just about as weak in the "I can actually use this for something" department as you can get.
Score: 13 Votes (Like | Disagree)

Born Again
iPads are about consumption.

i could get a surface if i wanted productivity

leroypants
The stench of desperation is overwhelming.
Score: 6 Votes (Like | Disagree)

I've created and maintain several office style documents using just my iPad. Nothing extremely fancy but they are useful and agent the job done. It serves as a decent video editor too.

I'm not saying the iPad is some office rich powerhouse but let's not act like it's just a gaming device with a calendar either. You can do quite a lot with it if you choose to.


When talking about "productivity " ppl immediately think about making ms office documents. It's not just that!!! There're a lots more to productivity like making orders through websites, inventory, conferences, meetings , etc...
Score: 5 Votes (Like | Disagree)
Read All Comments