Samsung has released a new anti-Apple advertisement that highlights the perceived shortcomings of the iPad in comparison to Samsung's new Galaxy Tab Pro and Galaxy Note Pro tablets. Targeting not only Apple, the ad also criticizes Microsoft's Surface tablet and the Amazon Kindle. 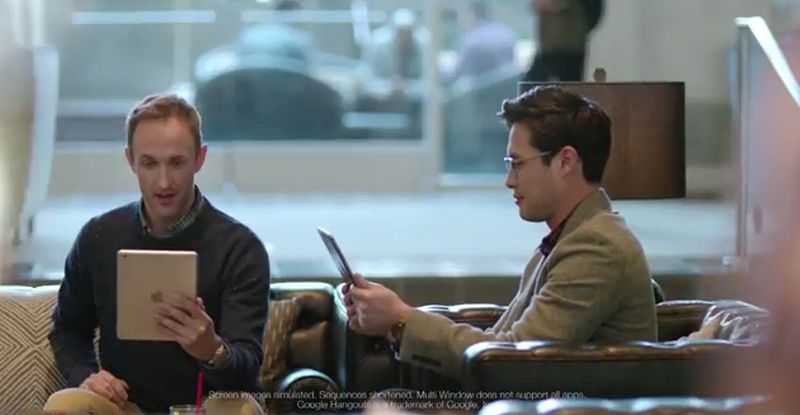 The ad uses three scenarios to highlight the advantages of the Galaxy Pro series over its competitors. The first is a business conference call, during which the Galaxy owner is able to talk and simultaneously send a report because of the Galaxy's multitasking feature that allows him to display multiple Android applications at once on the screen. There's also a slight jab at the Microsoft Surface, which is ridiculed for being "computer-like" because of its keyboard, battery pack and mouse.

The ad then switches to more personal uses of the tablet with a quick dig at Amazon's Kindle device, which can only read books, while the Galaxy can pull up YouTube videos during a book club meeting. The harshest comment comes at the end when two ladies at a spa are comparing their iPad and Galaxy tablets. The discourse on the lower screen resolution of the iPad (2048-by-1536 resolution) when compared to the Galaxy Pro (2560-by-1600 resolution) ends with a condescending smile from the Galaxy owner when the iPad owner retorts that her iPad has "the retina thingy."

Samsung has a history of chiding its competitors in commercials, so it's not surprising to see the Korean company take on the iPad shortly after unveiling its Galaxy Pro series earlier this year.

luckydcxx
Apple's commercials are classy, these are trashy. :apple:
Score: 95 Votes (Like | Disagree)

gnasher729
Samsung seems to get desperate. With the Retina iPad now going for $399, who in their right mind would buy a Samsung tablet?
Score: 59 Votes (Like | Disagree)

Apple's commercials are classy, these are trashy. :apple:

Also, competition is good, people. Apple has more reason to innovate/produce better products when they have competitors doing things (ex. here's hoping the next iPad can have two apps side by side).
Score: 58 Votes (Like | Disagree)

QCassidy352
I'm impressed that they manage to come off as incredibly smug and pathetically defensive at the same time.
Score: 43 Votes (Like | Disagree)
Read All Comments

Tuesday March 31, 2020 10:22 am PDT by Juli Clover
Apple has acquired weather app Dark Sky, Dark Sky's developers announced today. Dark Sky is one of the most popular weather apps on the App Store, known for its accuracy and storm warnings. Our goal has always been to provide the world with the best weather information possible, to help as many people as we can stay dry and safe, and to do so in a way that respects your privacy. There is no ...
Read Full Article • 192 comments