Taiwan-based accessory maker Yi Lin Enterprises has posted new photos on Weibo showing the purported rear shell of Apple's iPad Air 2 (Google Translate, via Mac Otakara). The images show off a gold housing with a number of design changes, including a new speaker grille with larger holes and a relocated rear microphone alongside the iSight camera. 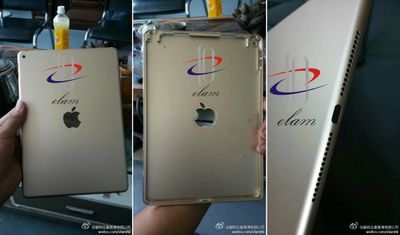 Last month, an alleged "perfect replica" of the iPad Air 2 surfaced, showing off a Touch ID home button for the device and recessed volume buttons along with the same refined speaker grille. The prototype followed the leak of a supposed front panel from the iPad Air 2 this past April, which showed an integrated display that may hint at a thinner form factor for the tablet.

Apple's iPad Air 2 is expected to launch alongside the iPad mini 3 later this year, and is expected to include a faster A8 processor in addition to the aforementioned Touch ID fingerprint sensor and refined physical features. Rumors have also suggested that Apple is working on a larger, 12.9-inch iPad Pro, however recent reports have indicated that plans for the tablet may be on hold for the foreseeable future.

sputnikv
internals aside, i don't see them doing anything interesting with the ipad anytime soon
Score: 21 Votes (Like | Disagree)


0 GB in the shell, which is all the article is about.

There's no reason to believe that the next shipping device will still have 1 GB of memory unless you believe that Apple never increases ram size. If that was the case, we'd still have the 128 MB of RAM that the original iPhone had or the 256 MB that the original iPad had. The iPhone has seen 3 memory increases in its lifetime, and the iPad has had 2 increases. By either measure of frequency, it seems like this iteration will likely feature a bump to at least 2 GB, especially considering that they went to 64 bit processors last year, so this years processor upgrade should be less dramatic and they'll look for improvements elsewhere.

I can't wait for 2 GB idevices to arrive. Not because they're necessarily needed, but just so people will stop complaining about having only 1 GB of RAM and Apple never upgrading it. Of course, next year people will just complain about only having 2 GB of ram, and that Apple never upgrades ram, but at least we'll get a year off from the complaints (hopefully).
Score: 13 Votes (Like | Disagree)

LucasLand
I think they've gotten to a point there isn't much they can do differently on the outside. future iPads will show improvement with internals and software. so pics like this don't mean much
Score: 11 Votes (Like | Disagree)

I still don't know why I need a tablet AND a laptop AND a smartphone. My Macs and my wife's Windows laptop suit perfectly our digital entertainment needs along our smartphones.

You don't. Is somebody physically telling you that you do? I feel like it goes without saying, but just because something might work for other people, it does not mean that you are required to do/buy the same.

Yes, and they've soldered it right into the rear shell, so it makes sense that you'd ask that and isn't at all a vapid question beyond any of our abilities to answer with certainty. :p
Score: 9 Votes (Like | Disagree)
Read All Comments