A new physical mockup claiming to be based on real iPhone 6 machine schematics from supply chain sources has surfaced on Chinese technology blog 86Digi (via Nowhereelse.fr, Google Translate).


The physical mockup shows the 4.7-inch iPhone 6 as a 6 mm thin device featuring rounded corners and various physical changes. In line with other reports, the model shows the power button now located on the top right hand side of the device, rectangular volume controls on the left, and the camera and circular LED flash on the rear. 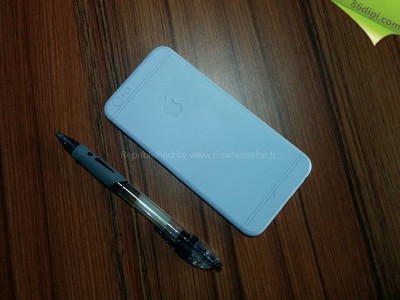 Notably, the mockup also shows two antenna breaks cut out on the device's rear, with the post noting that Apple will incorporate a three-stage aluminum design on the back of the iPhone 6. This is partially in line with a report from Mac Otakara last week that claimed Apple would be doing away with the glass breaks currently found on the iPhone 5s in favor of an aluminum design, although it is unsure how Apple will incorporate changes to its overall antenna layout to accommodate the new look.

The photos and video of this new mockup follow images of other physical mockups in recent days, including another model from a case manufacturer showing the 4.7-inch iPhone 6 and one showing the larger 5.5-inch iPhone 6 based on design drawings shared by Japanese magazine MacFan last month.

The iPhone 6 is expected to be unveiled this fall in two different sizes of 4.7-inches and 5.5-inches. The 4.7-inch version of the device will likely ship first in the third quarter of 2014, while the 5.5-inch version is estimated to ship later this year or early next year as Apple solves issues with the phone's display and battery.

In addition to a larger display, both versions of the iPhone 6 are expected to include a thinner profile, a faster A8 processor, Touch ID fingerprint sensor, and an improved camera that may feature optical image stabilization or electronic image stabilization. Jefferies analyst Peter Misek also claimed in a research note earlier this month that Apple is negotiating for a $100 price increase on the iPhone 6.

Broph
Day one purchase for me.
Score: 31 Votes (Like | Disagree)

0098386
How many more mock ups are on the horizon? Can someone mock up the horizon so we can work it out first?
Score: 27 Votes (Like | Disagree)

Mr Fusion
Who gives a **** how thin it is... Does that make it look better when it has to sit in its dock charging three times a day?

ouchiko
It's hard to get overly excited these days about it. It's essentially going to be a well built, metal cased 5-6" phone which will ultimately look like most of the other phones on the market.

The evolution of the software seems to be most important and in Apples case, most lacking element at the moment. Having a slightly bigger grid for your apps won't change much.

juanm
Apple is losing market share because cheaper phones from other manufacturers have improved so much, they are a viable cheaper alternative.
Apple's move? make it thinner, and increase the price by $100... go figure.
Score: 8 Votes (Like | Disagree)
Read All Comments