As we progress further into 2014, iPhone 6 rumors have begun to pick up, with case designs, schematics, molds, and alleged iPhone parts surfacing over the past few weeks to give hints at what Apple's larger iPhone might look like.

One image shows a physical iPhone 6 mockup that has allegedly been used to create cases for the next version of the iPhone next to an iPhone case made using the dummy version. 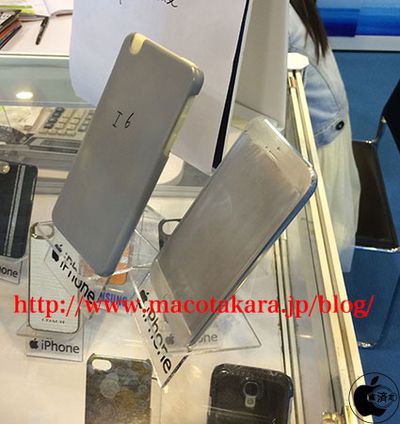 While few details can be gleaned from the model, it does appear to be larger in size with rectangular volume buttons and a sleep/wake power button on the right hand side of the device, which is in line with some previous rumors. It also possesses a round camera flash, as was described in schematics that leaked in March.


It is unclear whether the mockups and the cases are representative of the actual iPhone 6, but thus far, the iPhone 6 leaks coming out of Asia have all shared many of the same design similarities outlined above.

Apple's iPhone 6 is expected to come in two sizes, at 4.7 inches and 5.5 inches. The majority of leaks we have seen so far have depicted the 4.7-inch version, as it is said to be in production for a September or October release. The 5.5 version has seen some production delays, which could see it being released later in 2014 or in early 2015.

In addition to two display sizes, the iPhone 6 is expected to include an upgraded A8 processor, camera improvements in the form of optical image stabilization, slimmer bezels, a thinner chassis, and Touch ID support.

So much for doubling down on secrecy.


I'm in favor of auto-banning anyone that utters that phrase anymore..
Score: 26 Votes (Like | Disagree)

I guess they go through a few versions and just settle on a 1 version. Forever.


And just what is wrong with the iMac?
Score: 12 Votes (Like | Disagree)

Get some putty, plug these holes because we have another leak!!!

Oh wait, Apple ran out of putty. So much for doubling down on secrecy.

Boatboy24
OMG, you'd think there was an Apple "event" next week!
Score: 8 Votes (Like | Disagree)

JoEw
The double standard everyone holds apple to is insane, both fanboys and clearly non-fanboys.
What the **** do people want? An iphone that looks like an android phone so android people and can be like apple is copying android blah blah blah. Then if the next iphone is based off the last Iphone everyone complains how apple is not innovating cause they didn't change the design enough..

Moral of the story apple will never win with you people.
Score: 7 Votes (Like | Disagree)