The Associated Press is reporting that Apple will be launching iBeacon technology in its 254 U.S. retail stores today, with Apple quietly launching an over-the-air update to its Apple Store app to support iBeacon receivers in its retail locations. The official move follows a report last month stating that iBeacon integration in Apple Stores would be enabled through an Apple Store app update, with the app now prompting users about receiving in-store notifications once opened.

The Apple Store app also gives examples of what notifications can be pushed to the devices of in-store customers through the use of iBeacons, such as messages about picking up online orders and store events. 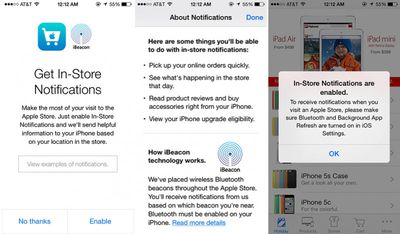 Apple reportedly demonstrated the use of iBeacon systems to the Associated Press in its Fifth Avenue store this week prior to its official rollout today:

The company demonstrated the technology to The Associated Press this week at its busy, 24-hour Fifth Avenue store in New York City. At this particular store, Apple has installed about 20 iBeacon transmitters, some of which are simply iPhones and iPads, which come with the capability as part of the iOS 7 mobile software released in September. The transmitters use Bluetooth wireless technology to sense your exact location. That's not possible with GPS, which don't work well indoors and aren't good at distinguishing between locations that are just a few feet apart.

First introduced at WWDC, iBeacon microlocation APIs are designed to access location data through the Bluetooth Low Energy profile on iOS devices, interacting with physical transmitters. The technology first appeared earlier this year, when Major League Baseball announced plans to begin incorporating Apple's iBeacon APIs into its MLB.com At the Ballpark app to create interactive experiences within stadiums in the near future.

The various implementations of iBeacon systems by different companies has also picked up throughout the past few weeks, with some companies such as London based digital publishing startup Exact Editions using Apple's microlocation receivers to deliver location-based access to iOS Newsstand publications. Shopping app Shopkick and Macy's also teamed up for the first retail-based iBeacons last month, allowing customers to find location-specific deals, discounts, and recommendations in the Shopkick app while in a participating Macy's store.

According to an official support page, Apple's iBeacon technology works with Bluetooth capable iOS devices running iOS 7 including the iPhone 4S or later, iPad (3rd generation) or later, iPad mini or later, and the iPod Touch (5th generation) or later. The Apple Store app is a free download for iOS devices, but the new functionality does not require users to download an updated version from the App Store. [Direct Link: iPhone/iPad]

iBeacons just seem to creepy, watching my every move in a building. LIke the worst part of Minority Report or 1984. :(


Definitely. At best it appears to be nothing more than a junk mail / spam generator for shopping malls. At worst...
Score: 2 Votes (Like | Disagree)

deputy_doofy
I don't know that this will ever truly replace using the elephant key at the zoo to listen to that horrible, monotone voice explain about the animal you're looking at, but there you have it -- a use at the zoo.
Score: 2 Votes (Like | Disagree)

I think the Topsy purchase might go right along with this. Collect shopping data on what i specifically do in a store...I looked at cases for 7.25 minutes...spent 8.63 minutes on the iPad Mini with retina...Then i receive targeted emails a few days later about those very things.

Could be a huge part of their service they provide to any retailer that would like to use iBeacon.

Might as well have BT on to begin with. GPS polling your location every so often would drain the battery.


I'm not sure. Don't most people have location services turned on most of the time but Bluetooth turned off to save battery, unless they're actively using some Bluetooth accessory? At least I do.
Score: 2 Votes (Like | Disagree)

andyvp
I think the Topsy purchase might go right along with this. Collect shopping data on what i specifically do in a store...I looked at cases for 7.25 minutes...spent 8.63 minutes on the iPad Mini with retina...Then i receive targeted emails a few days later about those very things.

Could be a huge part of their service they provide to any retailer that would like to use iBeacon.
Score: 2 Votes (Like | Disagree)

Just thought of something: how easy would it be to make a rogue iBeacon that pushes out malware? Of course, it would probably be fairly easy to track where the iBeacon is and find out who's responsible for it.


You don't actually connect. Beacons say I'm here and here is some information about me... the Apple Store app knows what to expect for values and serves up stuff that you've opted-in to receive.
Score: 1 Votes (Like | Disagree)
Read All Comments