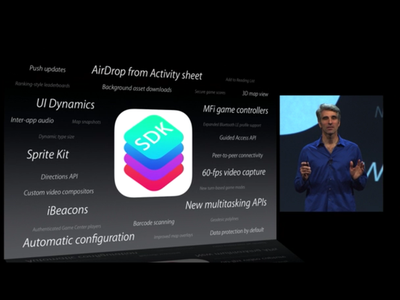 These APIs reveal promising new features that developers will be able to incorporate into future app and hardware releases, offering new gaming technology, new location tracking options, and more. Here's a closer look at a few of the most notable APIs:

iBeacons - According to MacWorld, iBeacons are designed to use the Bluetooth Low Energy profile for microlocation, allowing iOS devices to use Bluetooth 4.0 devices to access location data.

AirDrop from Activity Sheet - Apps will be able to incorporate AirDrop support, giving users the ability to share photos, documents and more with friends from within an app.

MFi Game Controllers - iOS 7 includes support for MFi "Made for iPhone" Apple Certified hardware game controllers, which will allow manufacturers to create dedicated iOS gaming controllers, turning the iPhone and the iPad into gaming machines on par with handheld gaming systems. Apps will be able to be designed around the Game Controller framework, allowing for seamless connectivity. Our sister site TouchArcade has shared an image from Apple's developer library detailing a reference design of both a standalone controller and an iPhone enclosure.

Multitasking and Background Downloads - Apple's new multitasking APIs are designed to allow apps to update and download content in the background at intelligently scheduled times. For example, a Twitter app might incorporate this functionality, downloading new content in the background while the phone is not otherwise in use, staying up to date without unnecessarily draining battery. Push notifications can also initiate content downloads.

Inter-App Audio - With Inter-App Audio, apps are able to share audio streams with other apps, an API that will make it even easier to use Apple's iDevices to create music.

60-fps Video Capture - iOS 7 will allow apps to capture video at up to 60 frames per second.

Peer-to-Peer Connectivity - This data transmission API is designed to allow users to discover nearby devices and initiate direct communication without Internet connectivity.

Apple has a slew of other APIs available for developers, which should bring a lot of changes to apps when iOS 7 is released. For additional information on iOS 7, we detailed many of the upcoming features and we also explored some of the hidden tidbits.

dukebound85
controller support? that is cool!
Score: 14 Votes (Like | Disagree)

chumawumba
iBeacons is cool, but when can I get iBacon?
Score: 11 Votes (Like | Disagree)

macus3r
No doubt Sony, Microsoft and Nintendo execs are all simultaneously ******** their pants at the news of Apple OK'd hardware game controller designs.
Score: 9 Votes (Like | Disagree)

On the topic of improving their multi-tasking, I would really like to see the option of a button to "kill all" running apps in the background as opposed to closing each one individually.

You never had to close each app individually in the first place.

Most of the apps (unless they're playing audio or using your GPS) will just become inactive in the background so they don't use any RAM/CPU, their state was simply saved to storage so you it can resume when you switch to it again. "Killing" them had no effect except to clear their state cache.

Apple has never really made the way iOS multitasking works clear so I can't blame users who think iOS manages multitasking like a desktop, but it doesn't. It's made to manage stuff by itself. Only killing active apps has an effect, and apps are rarely active in the background unless you have a clear sign they are.
Score: 7 Votes (Like | Disagree)

cababah
On the topic of improving their multi-tasking, I would really like to see the option of a button to "kill all" running apps in the background as opposed to closing each one individually.
Score: 7 Votes (Like | Disagree)

Vol7ron
Seems to me that some of these additions to iOS could end up in the Apple TV...Especially the game controller functions...
Score: 7 Votes (Like | Disagree)
Read All Comments